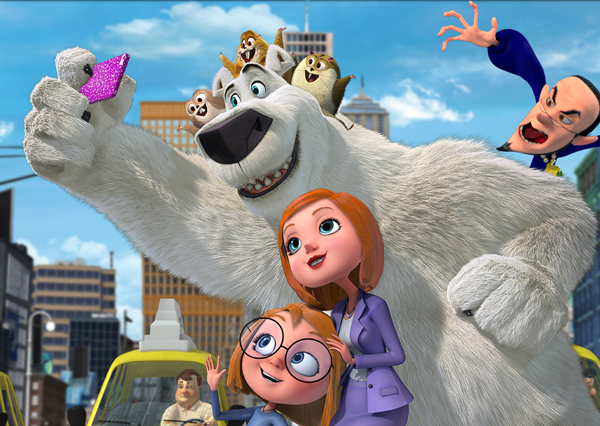 As animations go, Norm of the North tries way too hard to be cute and fails miserable as it blunders its way to the end credits where at this point you’ll be gauging your eyes out and wishing for a quick death.

Norm of the North is a cute talking Polar Bear (Voice of Rob Schneider), who at an early age discovers he can talk to humans. He realises after stumbling on a modern built human home in his beloved Arctic that his and other animals of the arctic are in danger of being pushed out of their home. With his gift of being able to speak human, he takes it upon himself to save his fellow animals be taking an adventure to New York to appeal to the human’s better nature and stop the development of these homes. Norm doesn’t venture alone to New York but has a trusted trio of lemmings as his back-up, it’s these scene-hogging lemmings that are the highlight of an extremely dull script that gives it, from time to time, an injection of toilet humour, and high energy jinx that makes it a little more bearable. Whilst trying to infiltrate land-mogul Mr Greene’s (Ken Jeong) company he builds up an unexpected bond with his PA’s Vera (Heather Graham) daughter and becomes an overnight celebrity sensation with his Arctic shake. Throw in the discovery of his missing Grandfather and there you have your story.

There may be a very weak and watered down message about how we need to save our environment but you could almost miss it through wondering where have you seen this story before? Norm of the North lacks any real imagination or originally creative material from its first time feature Director Trevor Wall who previously worked on Kids TV, his problem here is what he created for TV he has tried to deliver to the big screen and it really has fallen flat on its face. The film whilst being aimed at our younger generation doesn’t connect with its audience that was proven from the screening I attended which saw the kids very quickly becoming restless and wanting to watch something else.

Norm of the North is out in UK Cinemas March 18