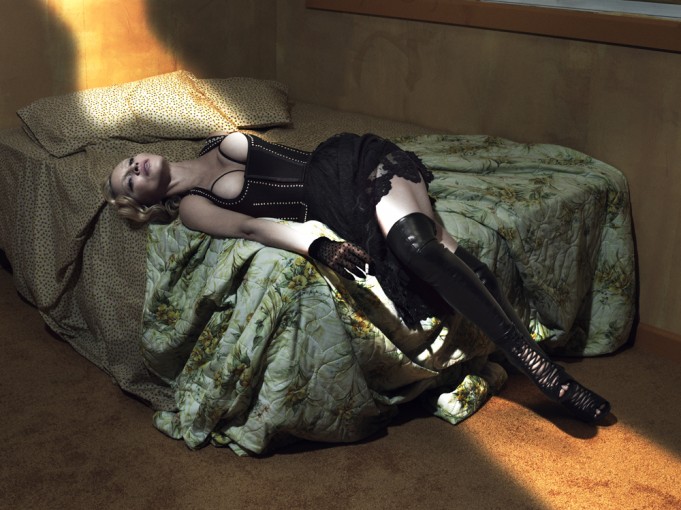 Our beloved queen of pop has gone topless for Interview Magazine at 56 years of age, and we must admit that she looks stunning, well why wouldn’t she? She is MADONNA after all.

The photos from the interview are very seductive and reminiscent of the Madonna that we all know and love. The interview is an in depth interview where she talks about life, drugs, death, her children, her rituals, and so much more. The Telegraph says “Madonna’s topless photos are a triumph for all women – whatever their age” and we couldn’t agree more.

I’m not saying I’m great at failing, but if you’re an artist and you’re into the learning process, you accept that you’re going to suck at things.

Take a look at some of the photos below and leave your comments. It’s about how people take drugs to connect to God or to a higher level of consciousness. I keep saying, “Plugging into the matrix.” If you get high, you can do that, which is why a lot of people drop acid or do drugs, because they want to get closer to God. But there’s going to be a short circuit, and that’s the illusion of drugs, because they give you the illusion of getting closer to God, but ultimately they kill you. They destroy you. I mean, I tried everything once, but as soon as I was high, I spent my time drinking tons of water to get it out of my system. As soon as I was high, I was obsessed with flushing it out of me. If all the celebs go topless, what we will have next? We supposed the good thing is, is that if everyone does it then this lights the veil of nudity from us all and maybe more people will get comfortable within to their own skin?

Here are a list of others that have also gone topless: Kim Kardashian, Rihanna, Keira Knightley and there will be many more that follow.

See all the photos here and read the full interview on http://www.interviewmagazine.com/music/madonna-1#_