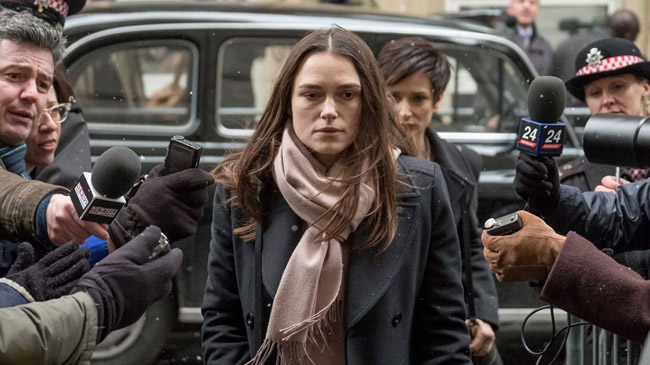 Deceit and corruption amongst political leaders is far from a new revelation, those who possess power in Government have been abusing their positions for hundreds of years up to the present day. The unsung heroes who are brave enough to call out the deception are very rarely heralded but Eye in The Sky director Gavin Hood once again takes the political moral compass to fascinatingly highlight the struggle of Tony Blair – war criminal – whistleblower Katherine Gun.

Keira Knightley plays Gun, a translator working at a Government Communications Headquarters. The setting is 2003 during Tony Blair’s time as Prime Minister and the British involvement in the Iraq war. As Blair’s argument for sending in British troops unfolds, Gun becomes increasingly angry and frustrated at the blatant lies and lack of evidence justifying his move. So when Gun and the rest of the department receive an email asking them to spy on diplomats in order to blackmail them into supporting the war, Gun’s moral fibre explodes into action.

The intensity that engulfed Hood’s Eye in the Sky is sorely missing from Gun’s account the urgent nature that made that such a gripping unveiling.  Once the story is exposed and hits the papers the film sprouts down three different roads. One focuses on The Observer’s involvement and changing their track in supporting Blair’s war to supporting Gun’s fight in unearthing the truth. The newsroom is filled with familiar faces with strong performances from both The Crown’s Matthew Goode and Doctor Who’s Matt Smith. Rhys Ifans is also a part of that team, based in the US, irritated by his paper failing to open their eyes to the illegality of this war, gives an over-exuberant performance.

As the story plods its way through the drudge of the newsroom battles, Gun’s home life is interwoven into the plot as she faces a legal battle for exposing the truth, she also has to fight the threat of her husband being deported. This is clearly an act undertaken by authorities in order to get her to drop her story.

Knightley’s performance is, on occasion, lacking in the passion and anguish you would expect Gun to have been experiencing at the time. The paint by numbers performance could have been switched up a level or two for such an important retelling but it hardly hinders in revealing the absorbing facts.

Hood’s passion for shining a light on political moral responsibility is a brave move for a filmmaker. With all the best of intentions to highlight Gun’s sacrifice in a corrupt political environment, the zeal is simply missing.

Official Secrets is out in cinemas October 18th