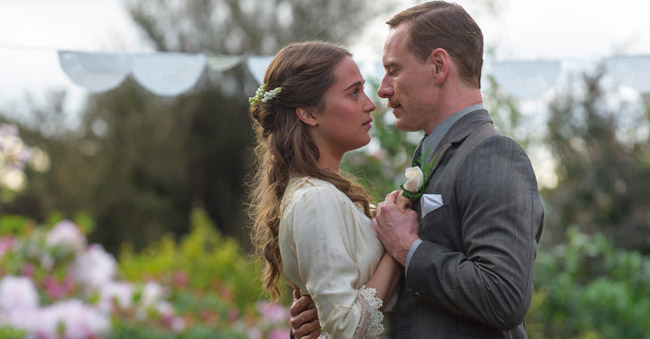 The Light Between Oceans (releasing on DVD and Blu-ray 13th March) depicts an era of romance and courtship in a time-gone-by; where love blossomed through romantic letters and the heart-stopping anticipation of the postman’s daily mail delivery.

Today, we live in a world where – for better or for worse – technology plays a key role in romantic developments.  We’re taking a moment to appreciate courtships that haven’t been conducted over a technological device, by looking back at some of our favourite film characters and their old school approach to finding love. Following the death of her sister, Kate Armstrong (Catherine Zeta-Jones) has to combine her role as a top chef alongside caring for her niece Zoe (Abigail Breslin). Her boss decides to appoint a new chef, Nick Palmer (Aaron Eckhart) while Kate takes some time away.  Even with their contrasting approaches to cooking and running a kitchen, they find a true connection through their love of food. Through cooking for one another, they learn to understand each other, and a romantic relationship quickly blossoms. Their courtship proves that food really is the language of love. While this hugely successful British film featured many love stories, there’s one that tugs at our heart strings more than the rest. A romance blossoms between David (David Bower) who is deaf, and Serena (Robin McCaffrey). Serena first notices David at a wedding and being quite taken with him, decides to learn sign language so she can communicate with him on their next meet. Their next encounter sees Serena using sign language to speak with David. Even though she makes many mistakes, she captures his heart and they go on to marry each other.

Everyone’s favourite Christmas rom-com, intertwined character stories, on their search for love. Jamie (Colin Firth) spent time abroad, escaping the tragic heartbreak of a failed marriage. Moving into his French cottage, he interacts and forms an attraction to his Portuguese housekeeper (Lucia Moniz). Despite all odds and the fact that they’re unable to have a conversation in the same language, they both end up falling for each other. Upon his return to England, Jamie decides to learn Portuguese before making the bold gesture of flying to her hometown and asking her to marry him. The 1987 romantic drama starring Patrick Swayze and Jennifer Grey still gets our hearts racing! Set in 1963, Frances ‘Baby’ Houseman (Jennifer Grey) meets her first love while on holiday at a summer resort with her parents. The resort’s dance instructor, Johnny Castle (Patrick Swayze), casts a magical spell on Baby after their first dance lesson. Helping out Johnny’s dance partner and fellow staff member, Penny, in her time of need, Baby becomes a regular dance student of Johnny’s, learning a number of highly-skilled moves. It’s through their shared love of dance that Baby and Johnny fall for each other. Many long last relationships have been built on the foundations of letter writing and long distance correspondence, but the story of lighthouse keeper, Tom Sherbourne (Michael Fassbender) and the love of his life, Isabel Graysmark (Alicia Vikander) is one for the ages. Having lived a life of isolation as a lighthouse keeper, Tom meets Isabel on one of his few days on the mainland. After their initial spark, they write numerous letters to one another citing their romantic feelings for each other. On their next meeting, they marry and Isabel joins him at the lighthouse, making Tom’s isolated life a lot less lonely. The hugely popular musical hit came out almost 40 years ago! But Danny and Sandy’s summer lovin’ is still one of our favourite stories. Teenagers Danny Zuko (John Travolta) and Sandy Olsson (Olivia Newton-John) summer romance takes a turn when Sandy unexpectedly stays in the USA and enrols at Rydell High School, the same school as Danny. When things go array, Danny decides to re-invent himself as a jock, joining the track team to win Sandy’s heart. Sandy decides to re-invent herself, shedding her good girl image for Danny. In the end, they come together as couple, with a new found appreciation for one another. Currently pleasing audiences around the globe, the film follows aspiring actress Mia (Emma Stone) and jazz musician Sebastian (Ryan Gosling) as they embark on a romantic affair. Despite their differences, Mia learns to like jazz, regardless of her previous antipathy, whilst Seb learns a new pragmatism in his quest to open a jazz bar.  When their respective careers pull them in differing directions, they need to make a choice between careers or love.