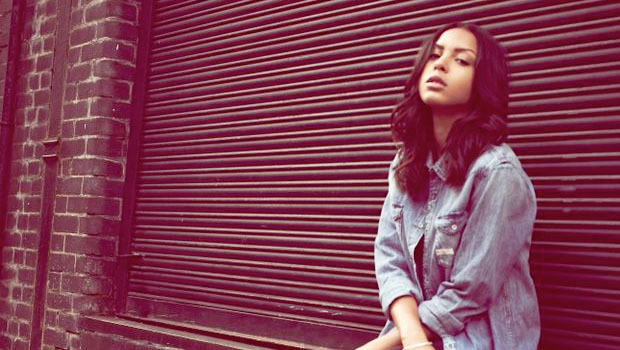 She’s young, beautiful and talented what more could you ask for?

Well a lot more in truth because even that heady mix is not always enough to get you signed in the competitive world of music. So what else do you need; well determination, self belief and direction are also important characteristics and the new UK talent Arlissa has all of those attributes in copious amounts.

With the option of attending university Arlissa decided to try her hand at music and with the above attributes she is now on the cusp of some major moves. She’s signed to Roc Nation and Rihanna’s manager and she appeared on the superb Adele’s radio show where she baked some cookies.

Already featured as one of the future talents for 2013 in the BBC poll, her current single Sticks and Stones allows us to hear that distinctive and powerful vocal.

Firstly tell me about getting signed to Roc Nation-massive look!

My label told me Jo Brand wants to meet me-he manages Rhianna and Jay-Z. I flew to New York for the day and flew back signed to Roc Nation it was literally like that it was amazing and so surreal!

In the video for Hard To Love Somebody with Nas there is a part where you walk in and it looked like you had just met is that right?

Literally I saw him in the hall but we actually met basically while we were shooting the video. The whole film was literally filmed as it happened.

He was really nice to work with. My friends and his friends just started jamming together, then we had a random conversation and then Nas and I just went and did our bits of the track.

Briefly how did Nas get to hear of you because it is strange for an unknown artist to get such a heavyweight to feature?

It was weird because I was writing stuff in the studio that I used and these guys called The Fearless who (I had worked with before) were in the next studio and they just came round and asked me to vocal the track. They sent it out to loads of people and Nas’ manager happened to hear the track it was really random. Nas heard it and said he wanted to get on the track.

How quickly did this all happen?

Well two weeks later I got a call saying that I am going to LA to record the track with Nas-I never thought in a million years I would be doing that!

I have read your back history and you made a very conscious decision to pursue music but how were you planning on making it if this Nas opportunity had not happened? I reckon I would have still pushed myself or it might have been another collaboration but I know that I would have made it because I really felt that with my music being so different that I would eventually get to where I want to be.

I know that you deferred your place at university-that was a brave decision.

When you are so young I think it is the best time for me to try to do this because I really did not want that whole thing where I get older and wonder what could have been so I had to try.

How would you define Arlissa’s sound then?

My sound is very different to a lot of other people. I know there is the Nas track but my inspirations range from Peter Gabriel, Vampire Weekend, Crystal Fighters, Kate Bush-these are the people that really inspired my album. I really wanted it to be different, ethnic and real instruments. It was so fun and organic it was really what I wanted.

Do you have a formula for writing or is it very fluid?

All the stuff on the album is literally my life, my diary. A lot of the time I will be on the train and then a title will come. Sometimes if there is something that has really upset me then I will write it down listing everything I want to say and then I construct a song-after that I think of my melodies and then the song begins to materialise.

Sticks and Stones your current single is, I take it is loosely based on the well known nursery rhyme.

Sticks and Stones is about a number of things. It was a time where everything was going wrong; I left school, broke up with my boyfriend and I was losing friendships with people who were close to me and basically it was a build up of stressful things that were happening to me. I wrote the song and it made me feel a lot more peaceful- in fact that song just opened up a lot more writing.

And the album what can you let me know?

Well it is literally the past two years of my life sometimes the songs are quite sad but in the end the album is basically happy. Hopefully the album will be released in summer.

What’s one of the weird things that has happened to you since getting signed?

I have never had a singing lesson in my life but now I have to have lessons so it is a bit weird.