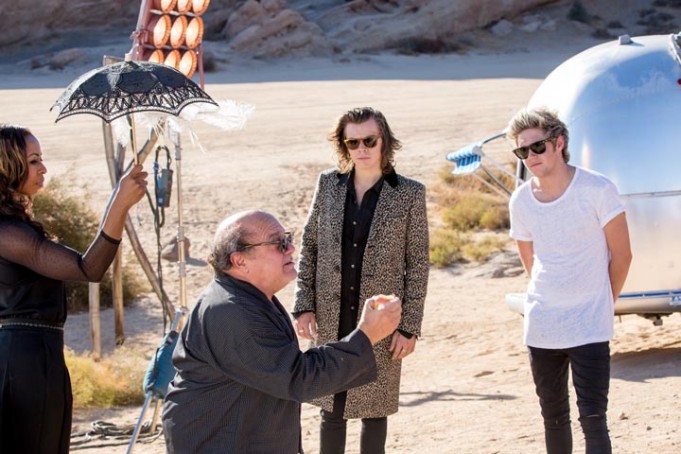 One Direction release their brand new single ‘Steal My Girl’ this Sunday (October 12th) in the UK.

The band filmed the video in LA recently and it features Hollywood star Danny Devito playing the part of their video director and we have the behind the scenes images for you all.

Before this the globe conquering pop band One Direction have smashed yet another world record following the announcement of their brand new album ‘FOUR’.

Album track ‘Fireproof’ has become the most downloaded free track in history, in just 24 hours. The song was downloaded 1,089,278 times in the limited 24 hours it was available to fans.

The album’s launch on Monday was heralded with the free giveaway of ‘Fireproof’. Since then the album has hit number 1 on the iTunes Album Chart in an incredible 67 countries on pre-orders alone. Last year the boys’ third album ‘Midnight Memories’ debuted at top spot in 39 countries, and went on to become the top selling album of 2013 worldwide.

The planet’s biggest pop band One Direction return with ‘FOUR’, their brand new album and the follow-up to ‘Midnight Memories, the UK’s best-selling album of 2013.

To herald the album announcement, the band are giving away a brand new track from the record as a free download, ‘Fireproof’. Fans can download the track for free from the boys’ official website from today for a limited period of 24 hours only.

‘Fireproof’ is written by Louis and Liam with John Ryan, Jamie Scott and Julian Bunetta – the same team behind their smash hit single ‘Story Of My Life’.

‘FOUR’ is available to pre-order from today, and will be released on November 17th 2014.

With a staggering 94 number ones and over 46 million records sold, in just four short years One Direction have gone from energetic pop upstarts to international superstars. Third album ‘Midnight Memories’ made them the first band in history to debut at the top of the US Billboard chart with their first three albums and saw them named the IFPI’s Global Artist of 2013 for becoming the biggest selling act in the world.

As the band’s song writing becomes more personal with each record, ‘FOUR’ is set to be their most stunning yet. The album follows the global success of their huge sell out ‘Where We Are’ stadium tour and their 3D film documentary ‘This Is Us.’ Add all this to their 3 billion YouTube views, 109 million combined Twitter followers and 33 million Facebook fans and it’s clear that Liam, Harry, Louis, Niall and Zayn genuinely are a worldwide phenomenon.

Band give away FREE track for 24 hours only as a thank you to fans www.onedirectionmusic.com