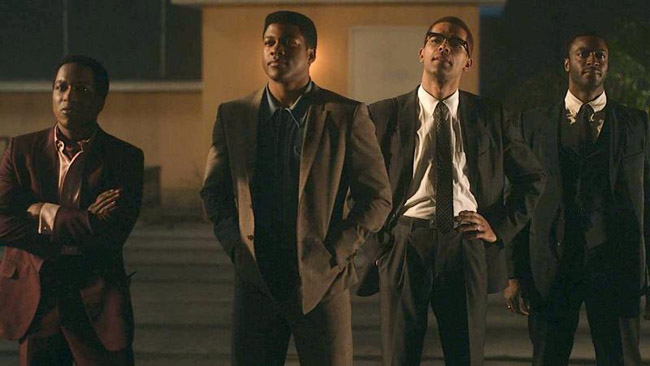 Regina King makes her directorial debut with the latest in great black cinema, an adaptation of Kemp Powers’ 2013 play marking a pivotal night in 1964. Lead by an eloquently laden dialogue-heavy storyline, its mere presence of its four leading men is nothing but mesmerizingly captivating.

Set mainly in a hotel room after Cassius Clay aka Muhammad Ali (Eli Goree) came out victorious in his fight against Sonny Liston in Miami. Malcolm X (Kingsley Ben-Adir) summons Clay, Legendary Soul Singer Sam Cooke (Leslie Odom Jr.) and American Football star turned actor Jim Brown (Aldis Hodge). Three of the most iconic African American’s of their time for what they think is a party to celebrate Clay’s win. What ensues is far from a party as a sombre, sobering conversation takes place between the men after it is revealed Clay is about to join the Nation of Islam.

The night also marks turning points in all the men’s lives, Malcolm X is on the cusp of leaving the nation due to conflicts with leadership and setting up on his own, and once this conveyed to Clay, Clay questions his friendship with Malcolm. Brown is also on the verge of quitting American Football to take up a life in front of the camera on movie sets and Cooke, not just a successful artist but a savvy businessman questions his solidarity in the fight for his people and, of course, Malcolm has a lot to say about all of these issues.

The most engaging of these conversations come when Malcolm berates Cooke for selling out and peddling his music to pander to the white man. When Bob Dylan, a white man, uses his platform for political movements causing Cooke to see red and question himself which inevitable leads to his eventual release of ‘A Change is Gonna Come’.

From lighting to the intensity of the conversation, King has captured this delicate moment with rousing integrity for the subject at hand. Aided and abetted by charismatic performances from all its leading men, from Goree’s depiction of Clay who on the surface is a no-nonsense force of nature but behind closed doors shows a simpler, softer side. Hodge’s Brown is enchantingly facilitating, Odom Jr’s Cooke is perfectly passionate and Ben-Adir’s, Malcolm X is stirringly short-sighted but with an air of reflective anxiety.

It may be conversation heavy but, it captures the mood with articulate force, from script to performances and direction this is one night in which you just may wish you were a fly on the wall.