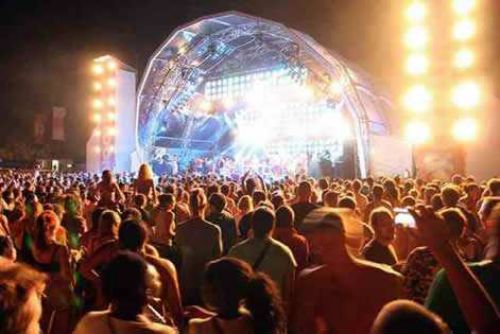 2012. Bass Music. A Festival. Croatia. This can only mean one thing…Outlook Festival. I will always remember my first here and this will definitely not be my last year. This was Outlook’s 5th year running, and supposedly every year it gets better, so what better time to go? Outlook is inspired by the bass of Jamaican music, and provides everything from reggae, dancehall and dub to jungle, D&B, dubstep, grime and more.

This year saw around 10,000 hit the Croatian town of Pula to skank the night and early mornings away to some of the best sound systems in the world. Everyone at Outlook was so happy to be there for the four day rave, even when rain descended for two days, we carried on dancing for hours in it, soaked through but smiling.

We camped, and as a person who has never camped I was dreading the experience, but as the campsite was on the beach and festival’s doorstep, I thought this would be the best way to soak up the entire atmosphere. It was.

The festival takes place at on old Fort with the Fort Arena itself with 20ft walls and a 2000 capacity, and some of the biggest names playing here with takeovers from clubs and labels. The Moat is 100m long with a 5ft wall and a perfect place to feel the bass. The Harbor and Dockside arena on the sea front play host to the live acts and headline artists and both were my favourite arenas apart from The Fort and Outside The Fort, due to it being on the sea and the light show. There was also The Dungeon, Noah’s Ballroom, Boat Parties and the daytime Beach Parties with two different stages to discover. The first night of the four day festival I mostly spent at the Harbour getting there early to watch the first act Akala who delivered an outstanding performance, and had dedicated fans in the audience. Mungo’s Hifi was up next, Fat Freddy’s Drop and then Gentleman’s Dub Club all of which we had been waiting to see. We moved halfway through to The Moat to catch Loefah and Oneman and at 5am also caught Klose One’s set here.

Friday night it was raining heavily, and as we walked down to the Dockside Stage to catch Rinse FM taking over with DJ’s like Spyro, Dismantle, Marcus Nasty, Oneman, Plastician and N Type we saw it hadn’t bothered anyone and the whole crowd was still hyped. Rinse hosted a good night and kept the crowds constant interest.

Saturday and still raining we saw Vagabondz host the Fort Arena where Hatcha gave us a two hour set on the history of dubstep ft. Mighty Moe, up after him was Mensah. We went back to the Harbour to see Joker & Crazy D followed by Skream followed by N Type B2B Hatcha. I also spent a bit of time Outside the Fort at the Jungle Clash. I have never danced so much in my life and this was one of the best nights of Outlook for me.

Sunday daytime and the sun was beaming on us luckily for the day we had booked the boat party.  We arrived down by the Dockside arena for True Tiger’s boat party where they also had Northern Lights and Klose One DJ’ing. At night the Get Darker crew took over the Fort Arena where I made sure I was there to catch Kromestar, Silkie and Quest with MC’s Crazy D and Alys B. Urban Nerds took over the Courtyard with artists such as Oneman and Rattus Rattus. The highlight of Sunday night was Congo Natty at the Harbour and for me was one of the most epic performances of Outlook.