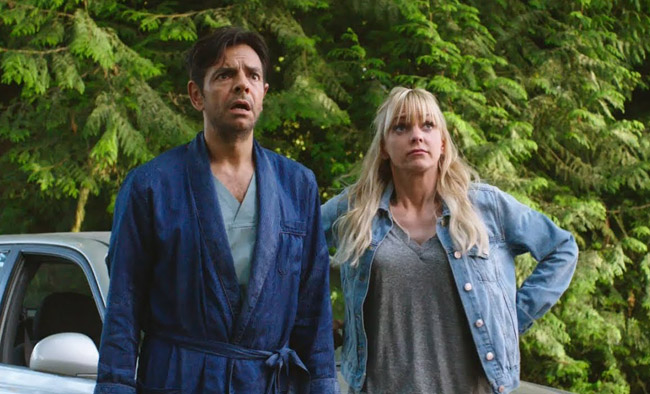 Like it or loathe it, remakes are here to stay for the foreseeable future. The latest in an extensive line of unoriginal ideas come from Cloudy with a Chance of Meatballs Robert Greenberg and Bob Fisher in the form of the 1987 romcom classic Overboard. Where the original provided the natural spark of Goldie Hawn and Kurt Russell fusing the chemistry in the first; this remake with its gender role reversal, has as much romantic energy as a damp squid and that’s barely the beginning of its many flaws.

In the original, Goldie Hawn played a wealthy, spoilt elitist who refuses to pay Kurt Russell’s character as a carpenter after he works on fixing up her wardrobes on her expensive yacht. When she fall’s overboard and suffers from amnesia, in a case of revenge, Russell takes the opportunity to claim her as his wife and takes him into his broke hillbilly family to look after the house and his kids… just to teach her a lesson but the pair ends up falling for each other.

This time around, Anna Faris plays Kate, a single mother to three girls having to handle two jobs to makes ends meet as she trains to become a nurse. The role of the wealthy elitist, Leonardo, is played by a virtually unknown actor outside of his home country of Mexico, Eugenio Derbez. Living off the wealth of his Father, Leo spends his day lounging around on his expensive yacht. Surrounded by beautiful women and hired help to do everything for him apart from wiping his own backside.

After Kate is hired to clean the carpet on the yacht, the pair eventually clashes over payment ending in a spat which sees him force her from her boat. That evening, whilst roaming the decks searching for his condoms he falls overboard, is washed up ashore with amnesia. With his Father on his supposed deathbed and a sister wanting to be next in line to take over the family business, he is left behind, assumed dead. Kate identifies this as her chance to wreak revenge and claims him as her husband.

From the outset, it’s evident this is just a carbon copy of the original with a few minor twists. By all means, we have the gender reversal and a whole lot of Latin fever including subtitles to add its own pinch of originality; but the plot line and its development comes across as a poorly paced and awkwardly dull doppelganger. A respectful reference to the original is given its due, but the premise is the same from start to finish but with an added and necessary extension to its conclusion.

If you’re thinking, at least it’s a comedy, we can get a few good gags out of it, you would be sorely mistaken. Gags are met with an uncomfortable silence experienced after being slapped by a dead fish. Granted, there are a few titter moments, but purely for the ludicrousness of its banality. Faris may have forged her path as a comedic actress; Debrez a huge comedy actor in Mexico, but due to their lack of any kind of spark the performances are lacklustre. Anyone would wonder why they even bothered showing up.

Trying too desperately to be funny has exerted the opposite desired effect; the finished product is dull as dishwater. A big splash it doesn’t make, this is one film that falls overboard and will sink to its watery death.

Overboard is in cinemas from June 22.