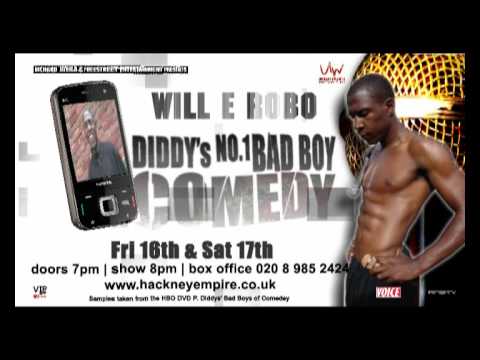 Animated, energetic, charismatic, and hysterical are just a few words that describe America’s unique, award winning comedy talent Will-E Robo. Billed as P’diddy’s No.1 Bad boy of comedy (the U.S. HBO TV series,) Will is a universal comedian, overflowing with energy, combining his hilarious story-telling abilities with amazing sound effects. With heavyweight UK support from Slim, Kat B, Wayne Dibbi Rollins and the award winning duchess of comedy Glenda Jaxson, this is a show for all lovers of great comedy!

In the US Will has received the Flip Wilson Award for Best Original Act, has an impressive television resume, including numerous appearances at The Apollo, winning six times. He has also appeared twice on both BET’s Comic View and Russell Simmons Def Comedy Jam. Most memorable are his appearances on P. Diddy’s Bad Boys of Comedy, (2005 & 2007).