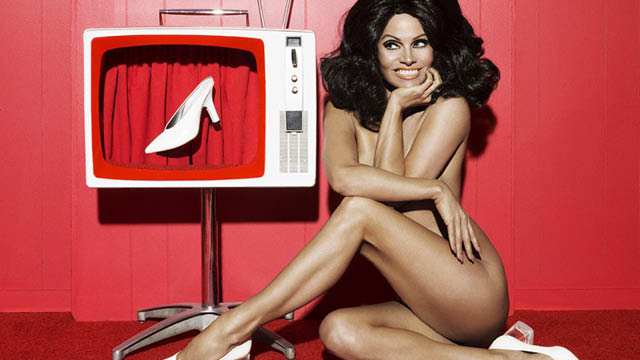 48 year old Pamela Anderson has stripped naked for Paper Magazine in a stunning new shoot. And guess what? She’s still go it.

Just like Kim Kardashian’s Paper Magazine full frontal shoot, Pamela Anderson models her new shoes and nothing else. Miley Cyrus also went nude for Paper Magazine where the singer posed on the cover with a pig…

The actual cover girl for this issue was Lena Dunham who posed in 2 different looks for the Girls, Girls, Girls edition of Paper. From beautifully capturing Millennial angst on Girls to championing feminist causes in her newsletter, Lenny, there are few voices as compelling or as impactful in pop culture right now than Lena Dunham’s. For the cover story, paper wanted to have her be interviewed by someone equally as bold and as committed to social justice in her life and work: Jane Fonda. Together, the two explore everything from sexuality and feminism to Hollywood sexism and the importance of saying “no.” It went on sale this winter at Opening Ceremony, with 10% of the proceeds going toward her non-profit, the Pamela Anderson Foundation.

Speaking to Paper magazine in her interview Pam says,

Vegan compassion is sexy. And I miss the fun! Being a woman is fun! Being a man is fun! No rules. I’m not the designer. Celebrities are not designers. I don’t like the word “celebrity,” since people can be famous for no good reason in this social media culture. Activism is fun.

What is beauty? It is any age. It is timeless. It’s hard to be glamorous in this digital world. I wish we still lived in black and white. People were more beautiful.

In 2015 Pammy also marked the end of an era when she posed on the last nude edition of Playboy Magazine. Pamela Anderson being the most famous Playmate in Playboy history, made this cover only too fitting. The stunning images where photographed by the legendary Ellen von Unwerth.

And in loving memory of Playboy’s last nude edition (RIP) here are ALL the covers Pamela Anderson has ever featured on Playboy.