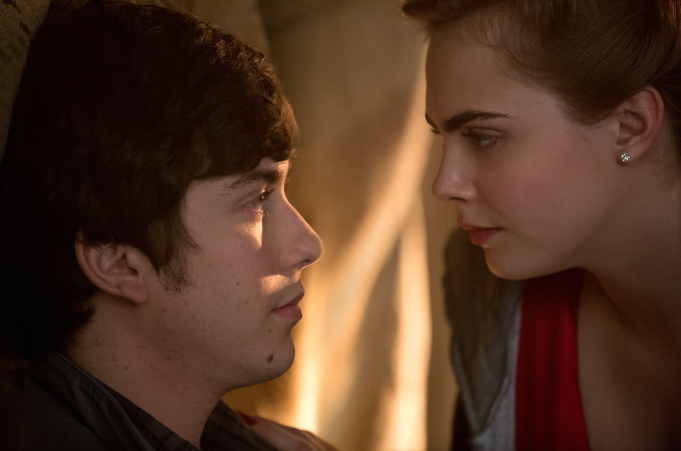 We seem to be getting flooded with coming of age films at a phenomenal speed these days and Paper Towns is another one to add to that ever-growing list. The downside to these films that once you have seen one you have with a doubt seen them all.

Adapted from the bestselling novel by author John Green, who also wrote The Fault in Our Stars, Paper Towns focuses on the story of Quentin (Nat Wolff) and his mysterious neighbour Margo (Cara Delevingne). Both are the same age, and as very young kids they were friends. We fast forward to their teenage years where both are in the final year of high school. Quentin is very much in the nerd set while Margot is the queen of the popular kids, and, of course, neither of them talks anymore, is this sounding at all familiar yet? Instantly I am reminded of Can’t Buy Me Love from back in the 80’s which stars a very young Patrick Dempsey.

Quentin is still very much in Love with Margo, and when one night she rekindles their friendship when she takes him on an all-night adventure of revenge he is convinced she feels the same way. When Margo mysteriously disappears the next day, rumours fly and Quentin believes she has left clues for him to come find her. This then turns into a road trip as he gathers his fellow nerd best friends for this little adventure of their own where they bond even more and experience a few first moments in their young lives.

Whilst this is essentially a drama, and frankly a very dull one at that, we are subjected to some humour. Weak and juvenile but humour all the same. The only one of which pulled a laugh from my mouth was when Ben (Austin Abrams) was dying for a pee while in the car with nowhere in sight to pull over. He relieves himself into a couple of supposedly empty cans. The car hits a bump and himself and Radar (Justice Smith) are covered in his urine.

With any drama you would expect something of note to happen, something intriguing to pull you in and keep you interested but the storyline is extremely weak and so transparent you’ll find your mind wondering, wondering why you paid good money to see this film. The cast performances are OK, but no real effort has gone into making you feel anything for any of the characters. If you decide to watch this because you’re a fan of Cara Delevingne don’t expect to see too much of her in the film as she only has about half an hour’s worth of screen time.

Paper Towns will appeal to a certain type of person, mainly females between the ages of 15 and 25, those ones you see down in Shoreditch that all look the same, come from a middle-class background and are just a little “boho chic”.

Paper Towns is out in UK Cinemas 17th of August.