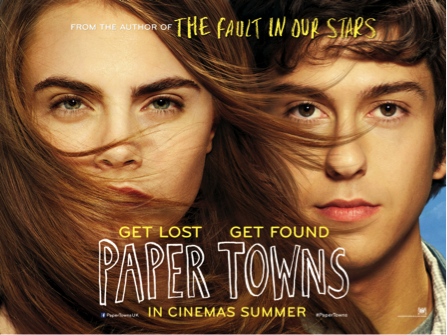 Neal Ardley and his players will be swapping the football pitch for the red carpet at the Wimbledon ODEON on Sunday 16 August for a special preview screening of PAPER TOWNS, and team supporters have the opportunity to buy tickets to join them. Encouraged to turn up at the venue in their club colours, it will be a great blue and yellow occasion.

A great opportunity for the club to be at the heart of its community once again and to thank John Green for his excellent sponsorship of AFC Wimbledon, the club anticipates that Dons supporters will get behind this event, bringing their scarves and flags along on the night. Cameras will be present to record vox-pops and interviews so messages can be sent to John Green for his support of the club.

AFC Wimbledon Commercial Director Ivor Heller said: “The support that John has shown us here at AFC Wimbledon has been awesome. This is our chance to give him something back. All our sponsors need our support whenever possible, but not many of them can influence a special screening of one of the biggest films of the year. Wear your colours and literally help us to send a message of thanks back to John in the USA!!”

Adapted from the bestselling novel by author John Green (“The Fault in Our Stars”), PAPER TOWNS is a coming-of-age story centering on Quentin and his enigmatic neighbour Margo, who loved mysteries so much she became one. After taking him on an all-night adventure through their hometown, Margo suddenly disappears–leaving behind cryptic clues for Quentin to decipher. The search leads Quentin and his quick-witted friends on an exhilarating adventure that is equal parts hilarious and moving. Ultimately, to track down Margo, Quentin must find a deeper understanding of true friendship – and true love.

John Green has recently extended his partnership with AFC Wimbledon by sponsoring the North Stand, (now known as ‘The John Green Stand’). Supporters can help show their appreciation by coming along and supporting the launch, which will be an evening to remember.  The preview screening is expected to sell-out due to limited space, booking soon is recommended to avoid disappointment.  Goodie bags will also be available to purchase on the night including:
Paper Towns book, The Fault in Our Stars DVD, Paper Towns official A3 poster, Paper Towns badges and an AFC Wimbledon matchday programme.

As part of an innovative idea which built upon the club’s links with John Green, PAPER TOWNS was the match sponsor for AFC Wimbledon’s first match of the season against Plymouth Argyle.

Once again, the club are extremely grateful to John Green for his continued support and encourage all supporters to join this celebration of his achievements by making this film and night a huge success.

Twentieth Century Fox are releasing PAPER TOWNS in cinemas across the UK and Ireland on Monday 17th August.
PAPER TOWNS is directed by Jake Schreier (Robot & Frank), PAPER TOWNS stars Nat Wolff (The Fault in Our Stars) as Quentin alongside Cara Delevingne (The Face of an Angel) as Margo.  Produced by Marty Bowen and Wyck Godfrey.

Tickets are available via the ODEON website at www.ODEON.co.uk / http://bit.ly/1IZjEn4