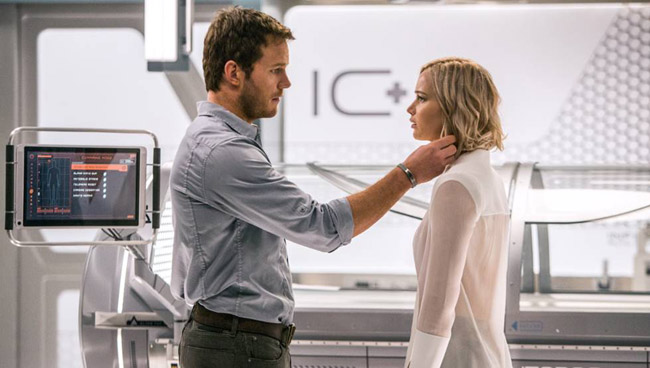 So much potential surrounded Passengers, an unconventional space age love story, Chris Pratt bringing the humour and Jennifer Lawrence with her sultry feminine wiles with a feminist twist. Even with Michael Sheen as a robotic barman caused a gif stir amongst social media lovers.

The Avalon, a vast spacecraft with so much empty space and monotonously dull colours, is headed to Homestead II, a developing planet over 120 years away from earth. Carrying 258 crew members and 5000 passengers all wrapped up in hibernation pods to be woken up 4 months prior to landing on their new home.  When the Avalon hits a meteor shower it causes one of the pods to malfunction, and after only 30 years in hibernation, Engineer Jim Preston (Chris Pratt) is woken up 90 years too early. Spending a year roaming the ship by himself, his mood spirals into despair until he lays eyes on the pod of Aurora (Jennifer Lawrence). Totally fascinated by the look of this women he delves into the passenger records to find out more about her – which in this day and age would be seen as cyber stalking – Struggling with his conscious and overrun with depression and with no help from the robotic barman Arthur (Michael Sheen) he finally gives into his loneliness and wakes her up. The conversation between Arthur and Jim tries to project itself as banter-like on occasion but the screenwriter certainly missed the memo stating smart and effortless humour is effective.

As the couple grow closer – which Pratt and Lawrence portray with sparkling confidence and igniting chemistry – we are treated to some spectacular special effects as the The Avalon loses its gravity function – leading to a stunning swimming pool scene – and slips into complete shut down along with the breakdown in the couple’s relationship when Aurora learns that Jim woke her on purpose which means he has quite literally murdered her and it’s down to the pair to fix the ship and save the lives of all the sleeping humans onboard.

The end result from Passengers is far from what we hoped; this lifeless derivative story just plods along to a vacant narrative that is all too familiar. Whilst over cooking the humour which fails to raise a smile let alone a titter, just like the Avalon spacecraft, it delivered a major malfunction which director Morten Tyldum failed to even bother to fix making this sci-fi voyage love story feel like a rush job with a jaded script.

Passengers is in cinemas December 21.