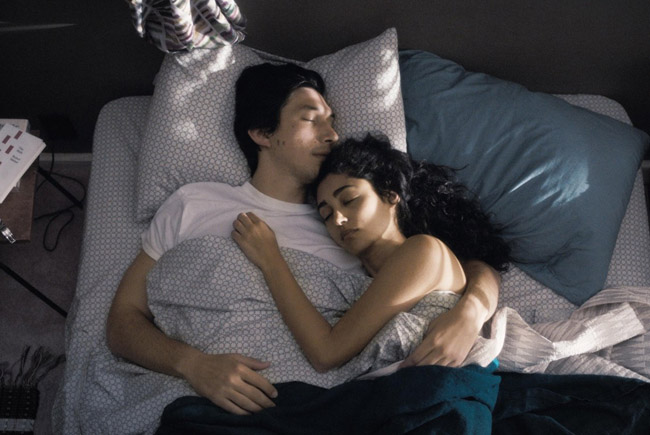 Whilst most critics are raving over Jim Jarmusch’s Paterson, the attraction for me simply wasn’t there as the quiet artful and beautiful tones hardly resonated failing to rise the simplest of pleasures within my soul.

Set in present-day Paterson, New Jersey over the period of a week, Paterson see’s Adam Driver – Star Wars: The Force Awakens own Kylo Ren- in his first lead as – strangely enough – Paterson, a married bus driver who has a love of writing poetry but lacks the confidence in his words to ever make them public – they are his escape from his world which unravels like a constant groundhog day.

Whilst Paterson spends his days behind the wheel of a bus, listening to passenger’s conversations which inspire him to write verse after verse on his breaks – which we see materialise on screen in his own scrawl – Paterson’s wife Laura, played by Golshifteh Farahani, spends her days at home indulging in one creative endeavour after another. One moment she is an interior designer, the next a baker who makes cupcakes to sell at the local farmer’s market to teaching herself how to play guitar so she can pursue a career as a country music artist, all of which she isn’t half bad at. The pair is childless so far but has an English bulldog named Marvin – a lazy dog who relishes in antagonising Paterson on a daily basis by knocking over the pillar box.

There is a hint that Paterson was once a military man portrayed by a simple photo, we are given no background into their life together and arrive in the middle of their normal mundane lives like a fly on the wall. Like most established marriages, conversation between husband and wife seems sparse with Laura doing most of the talking when they are both on screen together. Urging Paterson to get his poems published, whilst she is ever optimistic he just seems complacent in his life. The pair are like chalk and cheese but seem perfect for each other. Each night Paterson takes Marvin for his walk with a detour to the local pub where Paterson really seems to come to life with the rest of the nightly regulars, at one stage he almost becomes the town’s hero acting completely out of character.

Paterson’s calm demeanour and gentle comedic narrative accompanied with charming performances does evoke a slight warm fuzzy feeling but its predictability and lack of gumption fails to inject life making it soulless in its appearance.

Paterson is out in cinemas November 25th.