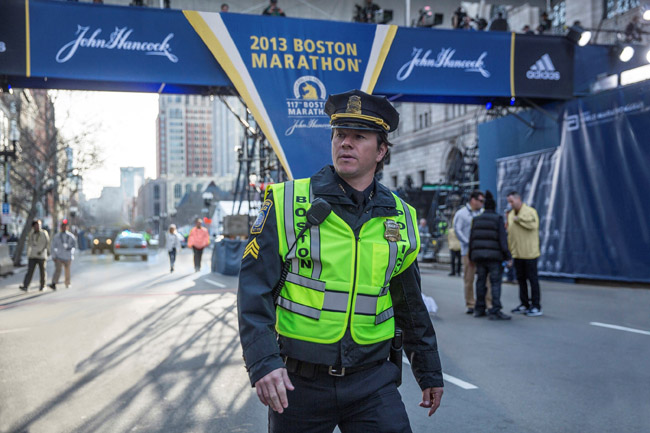 With 2017’s Deepwater Horizon, Director Peter Berg and Mark Wahlberg proved to be quite an explosive pair in their collaboration which brought to life the real life story of this drilling rig in the Gulf of Mexico, with spectacular vision and creativity (and one of the biggest sets ever built) it was a truly mesmerising piece of cinema.

Not even six months later Berg and Wahlberg have teamed up again in yet another real life story with Patriots Day, one which could almost come out of the minds of any Hollywood screenwriter. Cast your mind back to April 2013 on the day of the Boston marathon when two jihadi terrorists took their chance to create mass mayhem and killings with their homemade bombs. Patriots Day, even though a traumatic telling of terror, is ultimately a story of the true spirit and tenacity of the people of Boston to rebuild their lives in the darkest of times, screaming the most positive of messages of human resolve to whoever passes there way. As a touching tribute, Berg has even used the real life victims and officers on duty on that day to convey their own views to tie up the film at the very end, which is an intriguing touch.

The build up from the very beginning is most certainly the calm before the storm with a quiet floating sensation throughout the city of Boston as each small segment focuses on the main protagonists who all end up losing a tiny bit of their life on that fateful day. Firstly there is the native Bostonian, police sergeant Jimmy Saunders played by the native Bostonian Mark Wahlberg, even though in his demotion to marshalling the marathon finish line for misconduct, he is in jovial high spirits. We see a young couple as they wake both, who later, take part in the marathon; they start to prepare themselves for the day ahead. The intimate camerawork also focuses on a young father and his son about to embark on a special day together. In stark contrast, we are introduced to the misguided villains of the day, The Tsarnaev brothers, Dzhokhar (Alex Wolff) and Tamerlan (Themo Melikidze). Both apprehensive for the day ahead, the elder brother and leader Tamerlan bullies his younger brother, whilst Dzhokhar spends his morning watching bomb making videos on the internet who at the switch of a button seems to turn from a timid mouse into a complete sociopath. Berg from this point in turns the story on its head and engulfs the day’s proceedings with apprehension and tension up until the point the two homemade bombs do their traumatic and fateful damage and not letting go until the final standoff.

In what is clearly a heroic tribute to the people of Boston, Saunders takes charge of the carnage with pure grit and steely determination as the FBI, led by Special Agent Richard Deslauriers (Kevin Bacon), quickly infiltrates the scene. However, without Saunders in-depth knowledge of his town, the arrest of the brothers would be impossible. As night falls, the tension is turned up a notch when the police, which includes John Goodman and J.K. Simmons on true form, are hot on the heels of both Dzhokhar and Tamerlan in a relentless, perfectly choreographed sequence of scenes charged with electric gripping action right up until its very last minute.

The past collaborations between Berg and Wahlberg have proved that these men are perfectly in tune with each other’s vision and storytelling, and with Wahlberg’s own Boston roots, the desire to pay tribute to the fighting spirit of his city is felt in every last second.

Patriots Day is out in cinemas February 23rd.