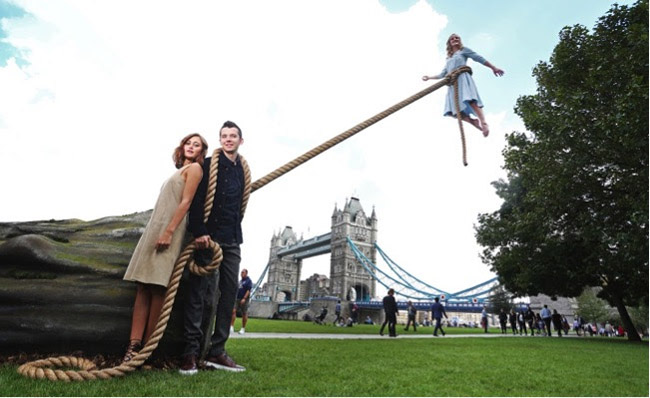 Passers-by were stopped in their tracks today when a young woman took flight, apparently floating up to buses, trees and even alongside a Peregrine falcon.

Tethered only to a length of rope held by a teenage boy, the spectacular effect brought to life the unusual abilities of the character Emma Bloom from the new Tim Burton film MISS PEREGRINE’S HOME FOR PECULIAR CHILDREN, released in the UK Thursday 29th September.

The gravity-defying aerialist was joined by stars of the film ASA BUTTERFIELD (Hugo, Enders Game) and ELLA PURNELL (Maleficent, The Legend of Tarzan), as well as a live Peregrine falcon, the avian persona of Eva Green’s lead character Miss Peregrine.

Ella Purnell, whose character Emma Bloom has the ability to control air and float unassisted, said: “It’s been amazing bringing these magical characters to life in London today, although I wish I was on top of the rope, I miss floating in the air so much! We had such a brilliant time making the film and Tim Burton has done an incredible job of bringing Ransom Riggs’ unique characters to life.”

Asa Butterfield, who plays Jake, said “This film is full of imagination and it was so exciting to share a piece of that wonder with audiences today. I’ve loved seeing everyone’s reactions to the floating girl and Peregrine falcon… it’s not something you see every day in London!  I can’t wait for everyone to experience the full world of magical characters in the movie”

From visionary director Tim Burton, MISS PEREGRINE’S HOME FOR PECULIAR CHILDREN is based upon the best-selling novel by Ransom Riggs and is an unforgettable motion picture experience.  When Jake discovers clues to a mystery that spans alternate realities and times, he uncovers a secret refuge known as Miss Peregrine’s Home for Peculiar Children. As he learns about the residents and their unusual abilities, Jake realizes that safety is an illusion, and danger lurks in the form of powerful, hidden enemies. Jake must figure out who is real, who can be trusted, and who he really is.

The screenplay is by Jane Goldman, based upon the novel written by Ransom Riggs, published by Quirk Books.

The film is produced by Peter Chernin and Jenno Topping.