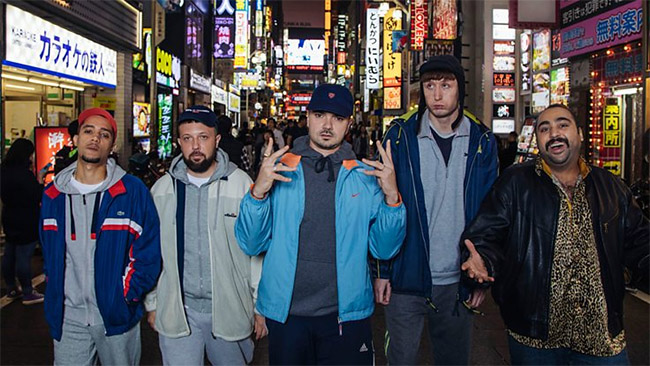 What works on the small screen doesn’t necessarily mean it world work on the big; none so trying words can be spoken about the BBC’s mockumentary People Just Do Nothing and their brief dalliance with fame in Japan that jeopardises not just friendships but its cult-like status.

Having gone off the air back in 2018 the Kurupt FM crew consisting of frontmen MC Grindah (Allan Mustafa) and DJ Beats (Hugo Chegwin) and hangers-on Steves (Steve Stamp) and Decoy (Daniel Sylvester Woolford) alongside waster aka the groups manager Chabuddy G (Asim Chaudhry) have had to find other ways to fill their time and earn a living. When words come in that one of their banging 90s’garage tunes is a big hit over in Japan thanks to an insane game show, the promise of fame and fortune turns their heads and they head overseas to meet with Japanese Record Company executives.

It’s good to see these boys delusions of immense talent is still striving strong but it’s a joke that gets tired real quick as Grindah launches into his trademark ragga rap to the unmoving joy of the exec’s but this doesn’t put off A&R man Taka (Ken Yamamura) who has other ideas for this group’s future. A future that renames them to sound like a paedophile ring i.e The Bang Boys, infusing a few generic boy band dance moves, and not only edgy’s out Chabuddy G but the rest of the crew with only pretty boy Grindah living the high life.

It feels like the boys have never left, while Decoy literally does nothing for the entire movie but follows the crowd, Steve wanders around the streets looking for his next joint whilst inadvertently charming their guide and translator. Even Chabuddy G spends almost the entirety of the movie alone and running up bar bills he has to do a bunk from.

By no means is this a fresh out of the fridge story, it feels stale, old and while the satire still lives on amongst our bad boy wannabes, it only pops in and out for a good chuckle and a cup of Darjeeling in minuscule waves.  These boys are better left off in small bite-size doses, just like the bright lights of Japan this movie swallowed them whole.