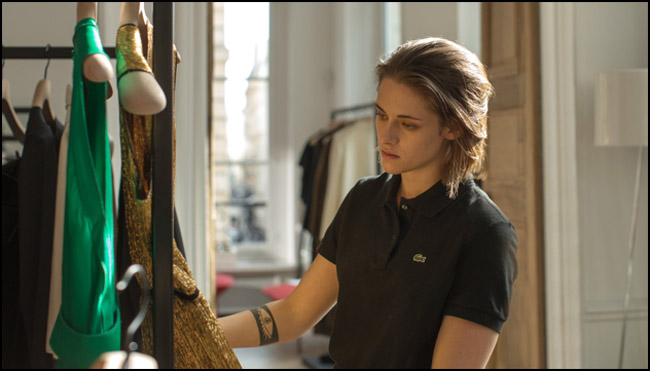 When technology becomes a supporting role opposite Kristen Stewart in possible one of her best performances yet we get a thrilling, spooky and anxiety filled art-house classic that speaks directly to a modern society which could see a return to form for director Olivier Assayas.

Personal Shopper isn’t a horror in the conventional sense but deals with the supernatural with a slow and apprehensive touch that unnerves. Broken down into two plot lines which are welded together by one single person, Stewart as Maureen – a ‘Personal Shopper’/PA to a German Supermodel, Kyra (Nora Van Waltstätten). Maureen is an American living in Paris who also, as a medium, can connect to the other side.  The assistant side of her life has her jetting around Paris on her moped, picking up the latest couture items and jewellery for Kyra for one event or another, with strict instructions no one is to try any item on. The temptation is hard to resist for Maureen and her svelte like model figure, as she spends nights in Kyra’s apartment when she is out of town, the lavish couture screams to be tried on.

The personal side of her life has her mourning the loss of her twin brother Lewis through a heart condition identical to her own. As children, they made a pact with one another; whoever dies first will come back and give the other a sign. Spending nights alone in the cold, dank, hollow Parisian countryside home of their upbringing, Maureen wanders the vast empty rooms talking to the walls, waiting for that sign, refusing to give up and let him go. Assayas visual tone encapsulates scene after scene with a bellowing eeriness building the trepidation with each ticking moment with an equally mellow soundtrack.

When strange occurrences start to surround Maureen, she believes her brother is the culprit but there may just be a more sinister force at work – at the same time her working life takes a dark and murderous twist. In a scene which she’s Maureen bound for London upon the Eurostar to collect the latest design, no verbal conversation is heard but she engages in a texting marathon with an unknown number, could this be the supernatural at work, maybe her deceased brother making contact or that of a twisted person out to cause the excitement of danger of where this could lead her, playing on her deep-seated fears? It’s an impressive scene of gripping tension.

In her maturity, Stewart has found her artful calling and grown into her skilful acting abilities, she portrays calm young women, who, on the surface, seems as though nothing will phase her but within her soul, and her emotional fears feel like they almost implode within her. With an ending that may leave some longing for closure, Assayas has created a piece that can bridge the gap between the commercial venture and art-house snobbery; however, it most certainly won’t be everyone’s cup of tea.