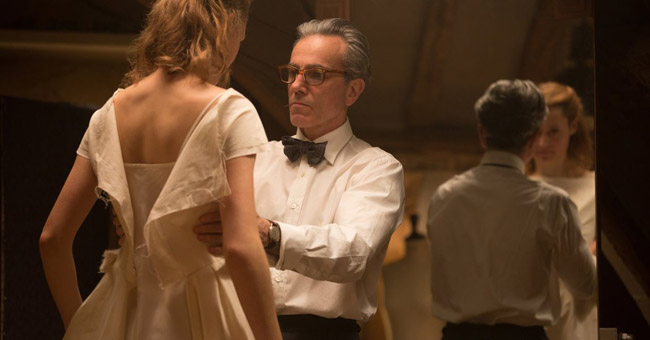 It’s almost criminal that Paul Thomas Anderson’s Phantom Thread is Daniel Day-Lewis’s swansong. The award winning actor has taken method to levels of extremity and immersed himself into character after character with a passionate realism that embroils audiences to his pictures. In his final bow, Lewis brings to life Reynolds Woodcock’s 1950’s style and grace with an artist’s flair of confidence and disdain; giving a master class in believability in a lusciously vivid story.

When we first meet Day Lewis’ Fashion designer Reynolds, we quickly recognise the man he is. Set in his ways built on an unforgiving temper with a petulant bully attitude. He has no patience for frivolity or niceties, delivering his boredom with blunt force. Needing some time away whilst his latest lover is ousted from his home, he takes a trip to a country hotel in which German waitress, Alma (Vicky Krieps) — with her no nonsense conversation, integrity, and classically clean beauty — shapes an instant impact on his intrigue. As the whirlwind romance takes hold of them both Alma moves into Woodcock’s London home where she becomes his live-in assistant and model alongside Woodcock’s sister Cyril (Lesley Manville). As Woodcock inevitable becomes bored with the relationship over time, Alma realises she has to go to extreme levels to get the unconventional relationship back on track.

A charismatic bully, Daniel Day Lewis lived for months as Reynolds before filming even began and it’s almost inconceivable to see where the character ends and the actor begins. Reynolds is a cantankerous man who is at the height of his industry with his clients ranging from high society to Royalty. He considers enormous pride in his appearance. He can’t bare unnecessary noise and disruption breaking his tranquil breakfast and keeps to a regimented day to day schedule. He has no time for a lack of integrity and doesn’t think twice about letting his acid tongue roam freely amongst the women who rely on his exquisite eye to create a fashion masterpiece.

Krieps’ Alma almost gives Lewis a run for his money with her subtle nuanced performance. Alma is a shy woman who lacks confidence in herself and lets her admiration of Woodcock’s excellence manipulate her. It doesn’t take long for Alma to read the unhinged genius. Her confidence builds resulting in a game of relationship ping pong where the control firmly lands at her feet. Lesley Manville’s’ Cyrill is just as brilliant as her co-stars. Acting as her brother’s assistant, she is just as icy and rigid but with just a little warmth. The relationship she has with Woodcock borders on the strange, taking the role, as any outsider would assume, of his wife.

Paul Thomas Anderson can vary in his storytelling but all have an element of the strange and pretentious in its deliverance. Phantom Thread is no different but there is also that air of a sumptuously crafted masterpiece of icy opulence, elegance and a rigid yet bold humour. It’s a travesty that Daniel Day Lewis will no longer be a rich and authentic talent in our cinematic world.

Phantom Thread is out in cinemas February 2nd.