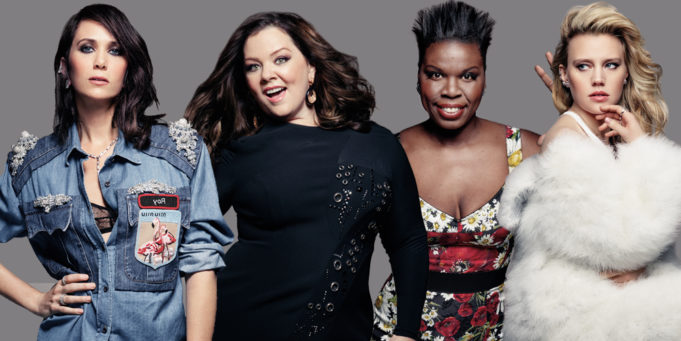 Melissa McCarthy, Kristen Wiig, Leslie Jones and Kate McKinnon have all landed on the cover of Elle Magazine.

The comedy issue which features a different cover for each of the main actresses in the soon to release ‘The Ghostbusters’ movie, is on shelves now in the July 2016 edition of Elle.

Each actress goes high fashion with Kristen Wiig leading the charge in an uber sexy Jeans Shirt Dress and Thigh High Boots. Photographed by Mark Seliger and styled by Samira Nasr, the comediennes can be seen wearing designer looks from the likes of Dolce & Gabbana, Calvin Klein, Miu Miu and more. In the interview, Melissa talks about her method of acting, “I get so psychotically attached to all of my characters, and I fight for them in probably the most annoying way. I hear myself saying to Ben or Paul [Feig, Ghostbusters’ director], “She wouldn’t phrase it that way.” I know it’s such an actory thing, but I feel it to my core: I have to represent the woman I’m getting to be. Even if she’s fictitious, she’s always real to me: three-dimensional, flawed, loving, screwed-up, as real women are.”