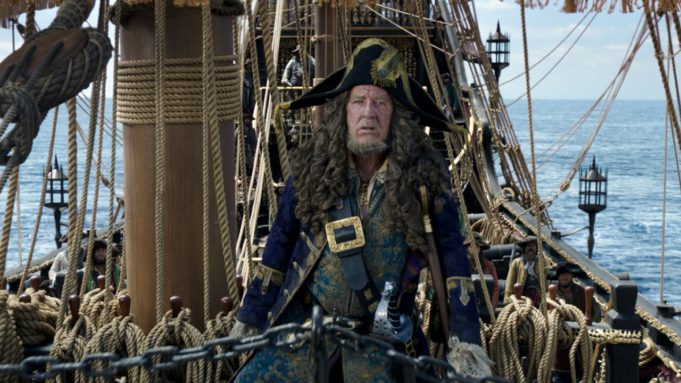 Yoho me hearties, Jacks back to ride the fair maiden of the sea, with the teaser trailer for Pirates of the Caribbean: Salazar’s Revenge washing up on shore back in October last year we’ve all been waiting patiently with our bottles of rum and pieces of eight for the full trailer to come to the rescue.

14 years ago saw the first Pirates of the Caribbean haul itself onto the willing public but over the years, with the loss of actors playing our beloved characters such as Keira Knightley and Orlando Bloom and a lack of originality the franchise has suffered a declining interest. The one stalwart never to go anywhere was our Keith Richards impersonator and eccentric Johnny Depp as Captain Jack Sparrow, and he’s back yet again to face his old time foe Captain Salazar, a merciless ghost pirate played by the great Bond villain, Javier Bardem.

As well as Depp, Geoffrey Rush as Captain Barbossa and Kevin McNally as Jack’s loyal first mate Joshamee Gibbs, all return with a surprise appearance from Orlando Bloom as Captain Will Turner – who we last saw back in 2007 at the end of At World’s End as he became Captain of the Flying Dutchman and becoming Davy Jones – We’re hedging our bets Davy Jones’s Locker has taken its toll on the not-so-young Will.

With brand new co-directors Joachim Rønning and Espen Sandberg – who have worked together on two Norwegian films and Netflix’s 10 episode series Marco Polo, the pair should bring some much needed fresh ideas to the table, and by the looks of the trailer a much more sinister feel.  Also joining the cast ranks are Stephen Graham, Martin Klebba, Brenton Thwaites, David Wenham, Kaya Scodelario, Golshifteh Farahani and even Paul McCartney, obviously not wanting his old Rolling Stone adversary, Keith Richards, getting one over him – We’re intrigued to see what part is lined up for this ageing rocker.

Johnny Depp returns to the big screen as the iconic, swashbuckling anti-hero Jack Sparrow in the all-new “Pirates of the Caribbean: Salazar’s Revenge.” The rip-roaring adventure finds down-on-his-luck Captain Jack feeling the winds of ill-fortune blowing strongly his way when deadly ghost sailors, led by the terrifying Captain Salazar (Javier Bardem), escape from the Devil’s Triangle bent on killing every pirate at sea—notably Jack. Jack’s only hope of survival lies in the legendary Trident of Poseidon, but to find it he must forge an uneasy alliance with Carina Smyth (Kaya Scodelario), a brilliant and beautiful astronomer, and Henry (Brenton Thwaites), a headstrong young sailor in the Royal Navy. At the helm of the Dying Gull, his pitifully small and shabby ship, Captain Jack seeks not only to reverse his recent spate of ill fortune, but to save his very life from the most formidable and malicious foe he has ever faced.

Pirates of the Caribbean: Salazar’s Revenge is out in cinemas May 26th.