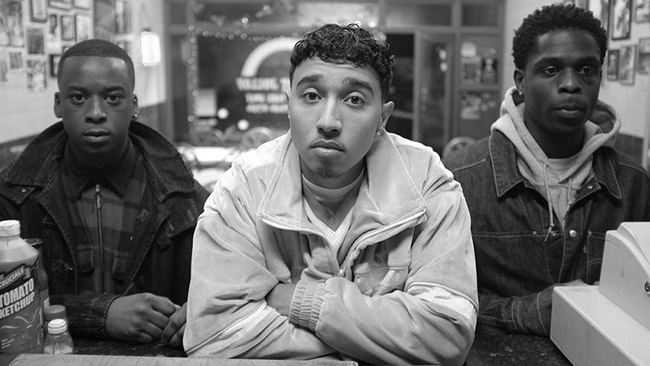 Reggie Yates – known for his hard-hitting documentaries – makes his feature directorial debut with feel-good verve and fresh eyes on young Black men. Straying away from the negativity and pouring nothing but feel-good positivity and garage vibes into the very foundation of a throwback story.

Set on New Year’s Eve 1999, the story focuses on three 18-year-old best mates, Cappo (Elliot Edusah), Two Tonne (Jordan Peters) and Kidda (Reda Elazouar) who are trying to break into the music scene through Pirate radio. It’s the biggest party night of the year, and the boys are desperately in need of tickets to the infamous garage night Twice As Nice. As they hop in the mustard yellow Peugeot to cruise around London to fix up their night accompanied by a banging tune or two, the brink of their friendship hangs in the balance as career changes, girls and downright tomfoolery throw a spanner in the works.

Written and directed by Yates, Pirates is a coming of age story filled with nothing but wholesome fun, a love letter to the music scene Yates would have grown up through. It’s pretty formulaic based on its plot but you can feel the love and passion put into telling a story which leaves the negative connections to the young black community firmly at the door while the bouncers pronounce “You’re names not down, you ain’t coming in”.

The throwback fashion moments filled with Avirex jackets and garish Moschino shirts fill the authenticity meter, it’s the performances of the three leading cast Elliot Edusah, Jordan Peters and Reda Elazouar which makes this film such a joyous celebration. Elevating the script with their brilliant comedic timing, Edusah brings an emotional core to his character as he struggles with how to tell his friends of his next move. Peters and his booming MC voice has that fake but adorable confidence when it comes to asking out the girl of his dreams. Elazouar is simply filled with comedic charisma as he backs his best friends for life.

Nothing short of utterly joyful, a positive nostalgic journey back in time to when life seemed so much simpler, Reggie Yates has delivered a real diamond in the rough. Let’s hope this is the start of something special for not only Yates but his incredible cast too.