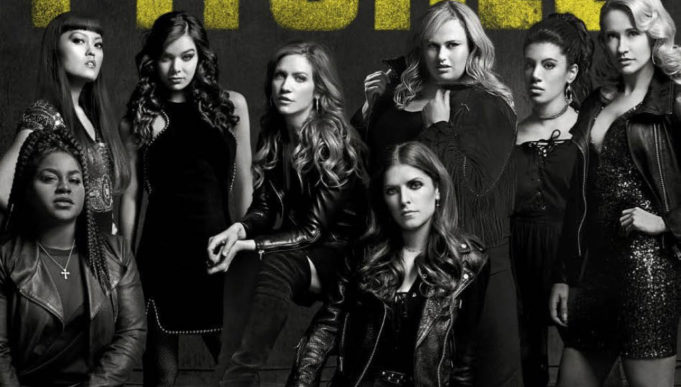 The aca-bella’s may be back for their tour de force with the third outing in the Pitch Perfect franchise, but the reality of stepping into the real world has hit hard. The sequel shines that overly glaring spotlight on a franchise that has finally given up the fight and hit a major bum note by stepping well out of its comfort zone. The time is ideal to put this out of tune melody firmly to bed.

We are introduced to the girls, finally, all grown up with college behind them and stepping out into the real world, the Bella’s are observing a hard life and missing their acapella family and the safety support network that comes with it. When an opportunity arises to join the armed forces on a tour of Europe the girls jump at the chance to get their melodies on one last time which pits them against four other groups in a battle to join superstar DJ, DJ Khalid, on his closing set. For the Bella’s nothing quite runs as smoothly as they hope when they find themselves in a situation which threatens their appearance on the closing night of the tour.

OK Go’s Trish Sie has taken over the reins from Elizabeth Banks, and whilst the direction is faultless, its cracked note falls firmly on the narrative. Instead of sticking to the formula which worked so well from its first outing, Pitch Perfect 3 seems to have forgotten its identity and gone down the singing Kingsman route. It tries too hard in giving the franchise a bit of an action injection with a criminal mind but to its detriment, it falls flat on its face. Throw in the same old tired gags — mostly at the expense of Rebel Wilson’s Fat Amy — and the same old clichés, even the lacklustre battles between the bands and you have a tedious pot of slop.

It’s not disappointment all for the much loved Bella’s, it exposes itself with a couple of crowning moments, one being in the Pitch Perfect musical compositions, faultless and harmonic, the ladies are constantly on trend on point and always leaves you wanting to hear so much more. The other being we appreciate a brief insight into Fat Amy’s backstory which leaves her wide open and vulnerable, for a time, before this story arc comes right back around to bite them in the backside.

The entire cast reprise their roles, including Anna Kendrick as Beca, Brittany Snow as Chloe, Anna Camp as Aubrey and Hailee Steinfeld as Emily and all seem to pick off where they left off. It almost feels like the cast never stepped out of the skin of their characters, scarily, if you bumped into them strolling down the street, you could be greeted by an acapella version of the latest chart-topping number. John Lithgow also makes an appearance with an incredible dubious Australian accent that simply doesn’t work. Pure laziness springs to mind in the casting process for his role, are we really lacking an Australian actor who could have so easily have turned out instead?

Shockingly disappointing, it’s undeniably time for the tired Bella’s and its creative time to finally hang-up its boots. If they were hoping to go out on a high note, the best they could muster was a mustering whisper.