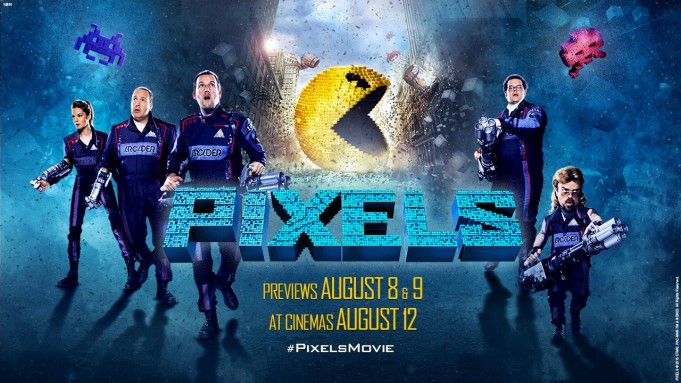 Never having been a fan of Adam Sandler and his silly bland humour I went into this film with a sense of dread of what lay ahead for the next hour and 45 minutes but as comedies graced with Sandler go I was actually entertained.

Starting the film in typical 80’s fashion with bad hair and even worse clothes, Sam Brenner (Adam Sandler), Will Cooper (Kevin James), Ludlow Lamonsaff (Josh Gad) and Eddie “The Fire Blaster” Plant (Peter Dinklage) battling it out in the games arcade, saving the world. Sam and Eddie go head to head against each other to compete for world champion in the battle of Donkey Kong. Director Chris Columbus, get’s the childhood of the 80’s baby’s spot on. We are transported back to what a childhood should really look like, kids getting out the house and actually socialising with their peers.

Fast forward to their adult life, Sam is an electrical technician working for a company called Nerd, which is far from a genius name. Will is the President of America; Ludlow is a conspiracy theorist and Eddie in jail. Earth is suddenly attacked by an unknown alien force, pinpointing certain areas of the world for their attacks and turning everything into Pixels. It turns out the Aliens have misinterpreted a video feed which was sent into space full off 80’s arcade games and thinking it’s a call to war.

Of course the American black ops or British military are just not equipped to fight this war so what better way for the President of the US to bring in his childhood buddies who just happen to be arcade geeks to save the day. The guys have to fight off the alien generals in the form of the 80’s arcade games such as centipede, Pacman and the all mighty Donkey Kong in order to save the world from destruction.

Not saying this is a film aimed at our younger generation but it’s more of an all round family film, mostly because the amazing visuals of our beloved games brings back a whole lifetime full of memories and nostalgia of our own childhood but will also appeal to very young kids for the fun it brings especially for them onto the screen.

The humour is light and a few one liners will sit well with the adults but is guaranteed to fly straight over your kid’s heads, it certainly has a few titters and snorts of laughter but nothing that induces those deep belly laughs. Sandler is Sandler, pretty one-dimensional; he pretty much plays the same role in every film he has ever been in. In fact, you can say that about pretty much all the cast with just the slightest exception from Kevin James who plays his role with a little more intelligence. They all just come across as being lazy and haven’t really put that much of an effort.

Pixels is never going to be a classic but because of the nostalgia factor it’s entertaining enough, certainly one lazy Sunday afternoon watch.

Pixels is out in UK Cinemas on 12th of August.