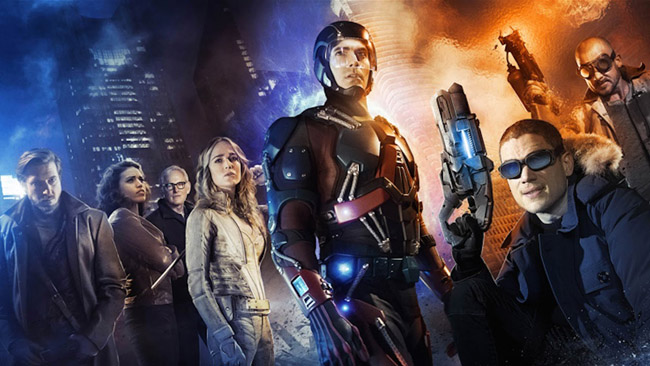 The DC Universe has brought together a team of heroes and criminals to face one of the cosmos’ biggest threats, Vandal Savage in DC’s Legends of Tomorrow.

The time travelling Rip Hunter and his team of winged heroes, former assassins, and even ice-gun-wielding thieves venture throughout time to prevent the rise of Vandal Savage, who by 2166 has conquered the world. To celebrate the release of DC’s Legends of Tomorrow on DVD, Blu-ray™ and Digital HD 29th August, we are taking a look at who the Legends are and what they can do. Played by the brilliantly talented Victor Garber (Sicario, Sleepless in Seattle, Titanic, Argo), Professor Stein is a world-renowned scientist for publishing his theories on time travel and his part in the F.I.R.E.S.T.O.R.M. project which focussed on transmutation. Following an accident with the particle accelerator in his lab, Professor Stein fused with Ronnie Raymond (later replaced by Jefferson Jackson) becoming Firestorm. Firestorm has the ability of nuclear physiology, where his abilities come from the nuclear energy his body creates, used to produce fire, fly and absorb nuclear energy. This intelligent and charismatic businessman, also known as The Atom from the Arrow series, is portrayed by former model Brandon Routh (Superman Returns, Arrow). Ray Palmer wears the A.T.O.M Exosuit (his own design) which can withstand the damage of bullets, arrows and even explosives! While in this suit Ray can fire photon blasts, compressed hard light blasts and electric bolts, and is able to miniaturise objects including the wearer. In extreme circumstances the opposite effect can occur, allowing ‘The Atom’ to reach enormous stature. The leader and founding member of the Legends team is a rogue Time Master (a council of individuals tasked with protecting the timeline) and time traveller, played by Arthur Darvill (Doctor Who). Rip had a deep love for his wife and son, who were murdered by the villainous Vandal Savage, thus prompting his mission to prevent Vandal Savage’s rise to power. Despite no meta-human abilities, Rip Hunter is a formidable foe, possessing a genius-level intellect and a high level of skill in utilising firearms, knives and even in hand-to-hand combat. Sara is a former member of the League of Assassins and Team Arrow and is played by the talented Caity Lotz (Arrow, The Machine). During her time with the League she became a master of martial arts, a skilled archer and a stealthy acrobat, whilst also exceeding as a master knife fighter and a skilled markswoman. As White Canary, Sara wears a white leather protective suit and uses extendable batons in addition to her sonic device that can be used to disable anyone who hears it. Kendra is played by the actress, singer and musician Ciara Renée (The Flash, Arrow). As a reincarnation of the Egyptian priestess Chay-Ara, Kendra can manifest a pair of bird-like wings to enable flight, but these large wings can also be used to enhance her strength and overpower her opponents. Hawkgirl can glide effortlessly, and then swoop down to tear down her foes with claws that are strong enough to rip through flesh. Falk Hentschel (StreetDance 2, Arrow) has tackled the role of this Egyptian deity in DC’s Legends of Tomorrow. Scythian is a reincarnation of the Egyptian prince Khufu, the soulmate of Chay-Ara, and the newest incarnation of the hero, Hawkman. Scythian’s soul is bound to Kendra’s and they die and are reborn in an unbreakable cycle throughout human history, however, Scythian is able to recall events in his past lives through visions. Hawkman can extend a huge pair of feathered wings that give him the ability to fly at incredible speed, and he also possesses immense physical strength making him capable of overpowering Vandal Savage in close-combat. Mick is a pyromaniac criminal and formal enemy of the, The Flash before being recruited by Rip Hunter played by Dominic Purcell (Prison Break, Blade: Trinity).  Mick Rory has many talents, including being a skilled engineer, marksman and fighter, and is infamous for his use of the Heat Gun which generates a beam of pure heat that reaches ‘absolute hot’ appearing as a flame blast. Heatwave can be seen as the polar opposite to Captain Cold.

In DC’s Legends of Tomorrow, Wentworth Miller (Prison Break) takes on the role of cold-hearted criminal, Leonard Snart. This icy world-class thief is calm and collected, yet utterly ruthless. His emotionless approach fits with his use of his Cold Gun, which generates a beam of absolute zero that freezes everything it touches. This weapon can also slow the molecules of fast moving objects, including the speedster the Flash.