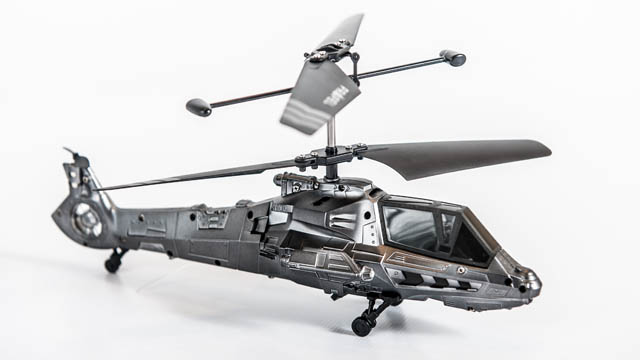 Let’s face it, when it comes to Valentines or even worse, a birthday, many women make the monumental mistake of buying themselves sexy Lingerie and then they have the cheek of telling us men, that it’s a gift for us. DOH!

Although we love to see our partners looking sexy, I think most men would agree that we would like a present that is actually ours to keep. With that in mind, ladies can I suggest you buy your sexy lingerie for your birthday and not ours and instead buy us one of these awesome Propels RC helicopters, take a look at the sleek design above. It’s the perfect accompaniment for his apartment. We got our hands on the Air Combat helicopter and we haven’t been able to put it down. The one handed motion controller gives a new dimension to indoor helicopters. It’s very easy to fly and with little practise you can fly the helicopter as if you were a pro. It is also very strong and durable, has a one handed joystick controller like a real pilot would use and can survive even the most inexperienced flyer! Meaning all your friends girls and boy alike can have a go without you worrying that its going to break when they fly it straight up into your ceiling and then POW onto the floor with a crash as they let go of the acceleration. Here’s me playing with mine at home, notice how I’m filming myself. Due to it’s one handed joystick controller, I have my other hand free to do other things like holding a cup of coffee of filming myself.

Advanced motion control technology gives you more real-flight manoeuvres and battle action than ever before! Using advanced infrared battling technology Air Combat copters “dog-fight” in mid-air. With each successful “hit” side-lights illuminate and the copter performs a spin. After 3 strikes, the defeated player’s copter automatically spirals to the ground – game over! Reset your copter and get back into the battle! Realistic lights, sound and vibration feedback keeps players engaged. On board 2.4Ghz digital spread spectrum allows up to 8 players to battle simultaneously.

Also did you know that it only costs £49.99 RRP and is available at Maplin Stores across the UK, inexpensive and a lot less than that fancy Agent Provocateur Lingerie set you was going to buy for yourself to impress us.

So do us favour and think about what us men (or boys, if you want to call us that because we want a toy to play with) really want for a present and go get us a Propel RC helicopter NOW!