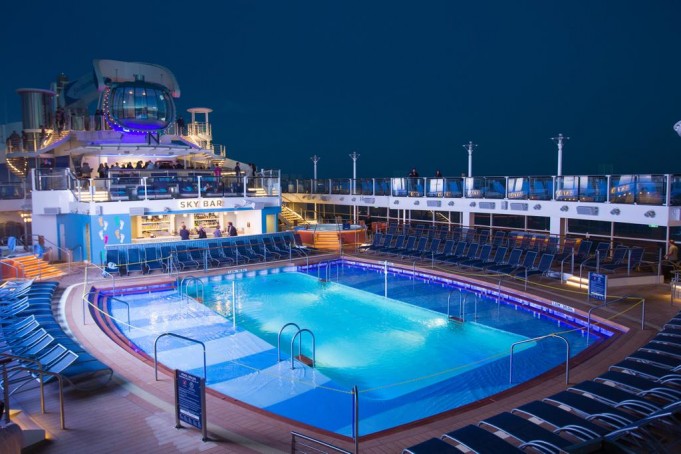 When I found out I was going to get to stay on a massive cruise ship I was over the moon, even though I thought “isn’t it going to be full of old people”.

After getting aboard this bad boy boat I realised my idea’s of what a cruise ship was, is totally outdated.

Did I have a great time? No! I had an AMAZING TIME!

So the Low down: This ship has all the latest technology (hence why it is so smart); Instead of the traditional “dining with the captain” scenario, en masse,  there are 18 different restaurants to choose from. Including Jamie’s Italian ( FYI his brownies are to die for). Dining in this way is far more intimate.

However when you need to go get your Buffet on head on up to the WindJammer on the 14th Deck and chow down on what ever you’re heart designers: from curry to roast, healthy salads to hash browns, or why not ask the chef to make you an omelette just how you like it.

Have you ever been sky diving? It’s something I have never wanted to do for fear of losing my life, but in the iFLY no fear is needed. I have never experienced anything like it, to be put in some sort of wind tunnel as I float above the air pushing me up. The instructor grabbed the back of my supper cool suit and then wizzed me up inside the iFLY in a spiral motion. Absolutely exhilarating! Still to scary? Why not try out the North Star It’s like one of the “London Eye” pods. It gently raises you to heights of 300 feet, with some pumping tunes and funky lights just to jazz it up even more. This Ship is massive, walking along the 14th deck I saw an inside and and outside pool, it wasn’t until the last day when I saw there was a third pool in the classy looking solarium! I didn’t even have enough time to ride the dodgems or flex my skills at the roller disco. There is simply too much to do. I must mention the staff, they are the kindest most accommodating people you could come across never have I been so well taken care of, they were an absolute highlight for me. The pies de resistance was the spectacular Star Water show. It was like nothing I had ever seen, they combine technology with dancing and singing using a vast array of different screens that interact with the performance. It’s so hard to explain but it was spectacular. And if that wasn’t enough technology for ya, they actually have robot bartenders…… yup, that’s right, a robot that makes cocktails, say whaaaat!!! To top it off I had an amazing massage, with the loveliest therapist, treatments are really expensive. I am a beauty therapist and I’ve worked for some up market places but we never charged as much as they do, it was wonderful but pricey.

I could talk about my experience forever. Royal Caribbean are definitely making a big push to cater for the younger market, no longer do they want cruise ships to make you think of a bunch of OAP’s playing bingo; but rather they have created a space and a feel that appeal to a much younger audience, from table tennis to surfing on the flow rider. It’s actually affordable too. From £499 per person all inclusive. All in all I would definitely go on a ship like this again, it was a wonderful experience amazing cocktails great food and lovely crew.

I would definitely do it all over again!!

Now you’ve heard about the adventure get the mani’ to go along with your boating atire. To see how I created the perfect nails for the cruise ship adventure click here. Written by the effervescent Tilly Li

Quantum of the Seas photos

The world’s first smartship, Quantum of the Seas, pushed the boundaries of technological innovation one step further today with the launch of the highest definition online 360° virtual tours on the planet.

More than 15,000 still images were taken using the latest cutting-edge technology allowed by Google and pieced together over five days to create the online tour of Royal Caribbean International’s newest ship.

Available on Google Maps Street View and at www.royalcaribbean.co.uk/quantumview, it takes the public on a seamless visual journey across 18 decks, featuring Quantum of the Seas’ host of other world-firsts, including robotic bartenders who can serve up to 1,000 drinks per day, indoor skydiving experience iFly and the North Star viewing capsule, which transports holiday-makers 300ft above the sea.

Users can even view the largest indoor sports and entertainment complex at sea, SeaPlex, from behind the wheel of the first dodgems on board a ship, or experience other activities on offer, such as its circus school or roller disco, at different times.