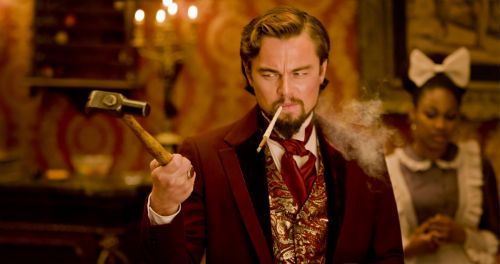 Set in the South two years before the civil war, a slave Django (Jamie Foxx) is trapped at the hands of brutal bounty hunter Dr. King Schultz (Christoph Waltz) who needs Django to help capture the Brittle brothers dead or alive. Django is promised freedom if he completes his mission and the two set out to seek the South’s most wanted criminals. Equipped with his vital hunting skills, Django remains focused on one goal: to rescue his wife Broomhilda (Kerry Washington) who he lost to the slave trade years ago from a brutal Mississippi plantation owner.

Slave-turned-bounty hunter Django and Schultz search ultimately leads them to Calvin Candie (Leonardo DiCaprio), the proprietor of ‘Candyland,’ an infamous plantation where slaves are groomed to battle each other for sport.  Exploring the compound under false pretenses, Django and Schultz arouse the suspicion of Candie’s trusted house slave, Stephen (Samuel L. Jackson). All their moves are recorded, and a treacherous organization closes in on them.  If Django and Schultz are to escape with Broomhilda, they must choose between independence and solidarity and between sacrifice and survival.

Django Unchained will be released: Friday 18 January 2013 in cinemas nationwide.