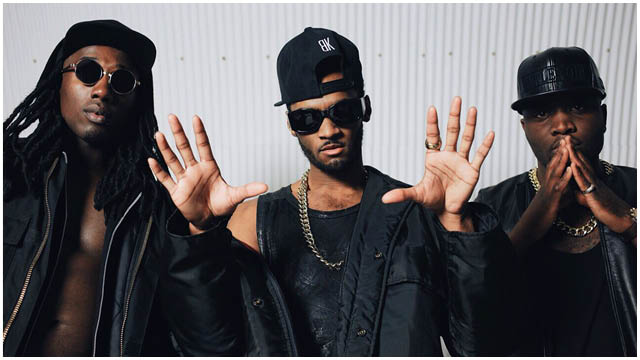 So here’s the feature Readers’ Questions to…. Rough Copy.  Some great questions came from you and Rough Copy were stoked with your response big thanks to you for getting involved.

A big congratulations to Jadey who tweeted in the winning question so look out Jadey Rough Copy will be coming to your house to perform live.

Look out for the brilliant single Same Formula by Rough Copy which is out now. The guys let me know they have some exciting things coming very soon by the way so check them on their social media contacts.  In the meantime have a read of  the answers Rough Copy gave when I met them down in Shoreditch for a face to face-Tidy!

@ElleAngeles–If you have the chance, would you like to star in a film or TV episode one day?

Joey-Mine would be Eastenders because I have been watching since I was young and everyone wants to be at the end with that famous drum beat-I would be the one that just found out that he was the father.

Sterling-I would like to be in Dream Girls (2006)-when I watched that I was gassed. To was the first film musical that was dropping rnb. I would love to play a role in that.

@DaniellaBarnett-What is/are the most important thing/s in life to you?

Kaz-My kids and my partner family is very important to me.

Sterling-I would say family but of course Kaz has said that so that would be boring to say the same thing I expect next on the list would have to be music-it’s my life. If I could not sing then I don’t know what I would do it’s all I know.

Joey-Well Joey! My first would be family though but another one would be performing on stage because when I am on stage there is no other place I would rather be. I do get nervous but once I hit my first note I am nice.

@BeckyDukuDubz -Describe each other in 5 words.

Joey-Michael Jackson no doubt at all he is the king

Sterling-Whitney she was amazing pure talent and an icon-when I was younger and I used to listen to Whitney she just made me feel something. @debsterJLS-Who would u most love 2 perform with n where ?

Sterling-Beyonce at the Super Bowl that’s career changing right there.

Joey-I would like to perform with Prince at Glastonbury HUGE!

Kaz-Omarion on a soundtrack for a film like a modernized version of You Got Served heavy.

Joey-Last track was the soundtrack for Fast And Furious the track was See You Again (2015) it was emotional because of the whole Paul Walker thing it was nice.

Kaz-Rihanna American Oxygen (2015) simply because not  many people won’t know that Frank Ocean is on the chorus.

@JanetWillie-What are your favourite albums by other artists?

Sterling-Got to say the same album as Kaz.

Joey-I have always been inspired by sisters because if it was not for them I would not probably be singing.

Sterling-I cannot found an idol but my mum is everything she is a person I look up to for sure.

Kaz-My partner she gave me tow beautiful kids-she is my right hand for sure.

@katlochere-If I came in to your house and looked in your refrigerator, what would I find?

Joey-Nourishment strawberry and some yogurt chocolate digestives with vanilla

Sterling-I have prawns I think and some ‘provisions’

Joey-Kaz is the best street dancer hands down.

Sterling- Would defo agree regarding Kaz.

Kaz- Sterling is the best at learning the moves but Joey is the best for just that pure natural movement because anything he does is just big.

@dopeGirlRC123-Cause you guys have swag would you open up a Rough Copy clothing line???

Joey-Of course we would it makes sense.

Sterling-There are a lot of off shoots from music.

Kaz-It’s all about the timing of course.

@Jadey-What’s been your most inspiring moment in your career so far and why?

@MissAJtheDJ-Do u think u could reach the same height of fame as 1D?

Kaz-You cannot measure success but at the end of the day successive is in the mind in part and I look around me and as far as we are concerned we are big.

Sterling-1D have done a lot of things but they have a massive team behind them of course.

Joey-This is us now we have a great team behind us and we know where we are heading and what we are doing so like Kaz said we big already!