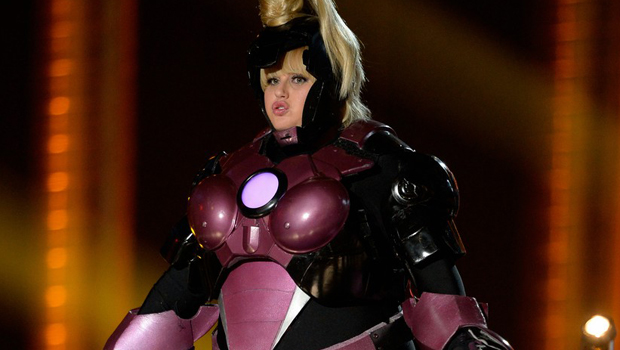 There is no doubt that MTV Movie Awards is one of the top events on the pop calendar, but there was something very different about it this year, step in Pitch Perfect and Australian comedienne Rebel Wilson.

When she presented an award with The Wanted at the 2012 VMAs, she walked on stage wearing a novelty tshirt and stuffing her face with food, so when it was announced early in the year she would have full hosting duties, we knew it would not be a quiet affair. Here is our top 5 moments of the 2013 MTV Movie Awards. Even though there were only two musical moment in the award ceremony this year (Boo!) the stand out moment was reunion of the cast of Pitch Perfect, in which Wilson starred as Fat Amy, to celebrate their award for Best Musical Moment. All of the characters popped on stage, singing hits old and new, and admit it; you have to love the aca-goodness.

In her best Janet Jackson Superbowl get up, Rebel took to the stage to talk about body confidence. She took it to a whole new level when she revealed her double nipple right on the stage for everybody to see…just look at the image, it explains it all.

The MTV movie awards are known for its fake cameo skits and Wilson’s one will not be forgotten about any time soon. Whether it was interrupting Anne Hathaway in her performance of “I Dreamed A Dream” in Les Mis, or donning the tiger suit for her role as the tiger in Life Of Pi. But the best part of the whole thing was Wilson stripping to Salt-n-Pepa’s “Push It” alongside Channing Tatum in homage to Magic Mike. From her pink tracksuit to the tight leather number, we have to applaud Rebel for being ballsy with her choices. They were probably the most talked about moments of the night, and we can definitely see why.

Of course, the presenter of the ceremony won the award she was nominated in.  While accepting the award she said ““The only thing that would make this better is if Zac Efron took off his shirt right now and came and kissed me.” Well at least one of them come true, and Zac Efron hopped on stage and gave her a smooch. It wrapped up her night nicely indeed!

She’s a bit of a handful, but we love Rebel Wilson! If the acting does not work out, someone needs to give her a presenting role.

What did you guys think of Rebel?