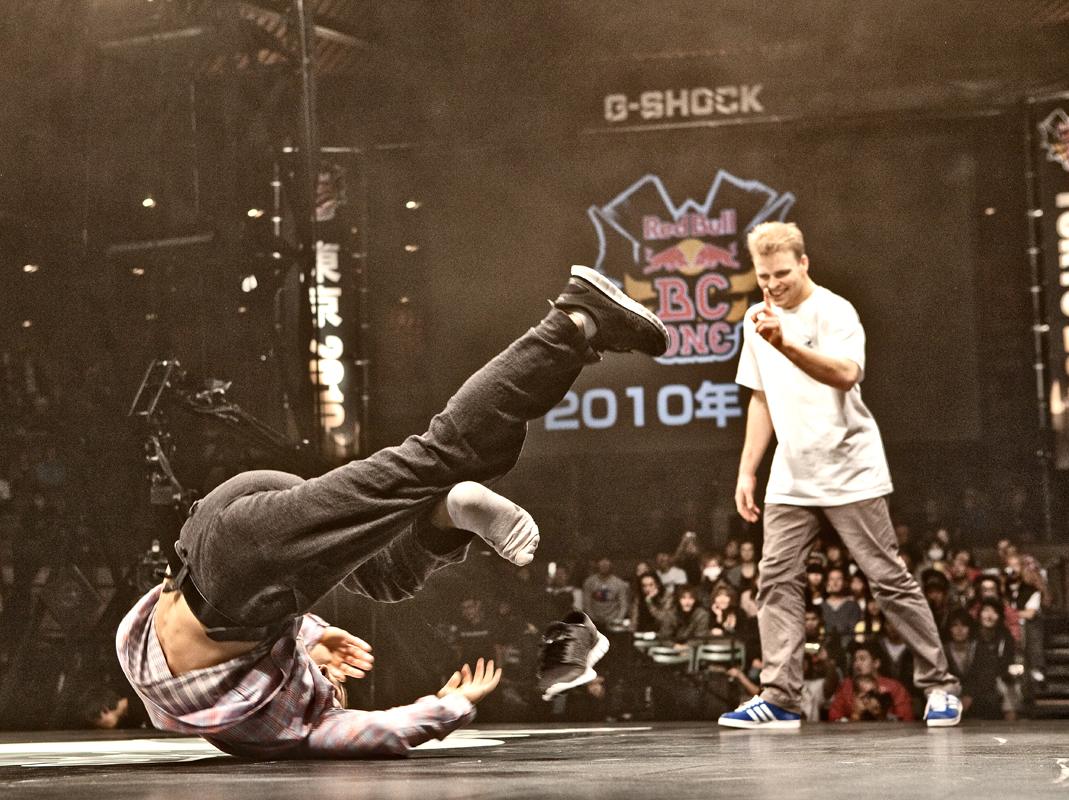 Aspiring photograher Peter Tweedie was chosen for Red Bull Reporter’s biggest assignment of 2010 – to head to Tokyo and capture the ultimate one-on-one B-Boy battle at the Red Bull BC One.

We’ve partnered with Red Bull to showcase his images exclusively here, so you can check out the moves of some of the event’s key players. Sixteen B-Boys from around the world rocked the Yoyogi Stadium in the heart of Tokyo. With destined body control they provided a breathtaking show, in which the Brazilian power mover Neguin, from the Tsunami All Stars crew, was chosen ‘The One.’

The B-Boys had to convince five judges, among them two-time champion Lilou and legendary Ken Swift. Decisions were not made easy and were often tight. After battles in Biel, Berlin, Sao Paulo, Capetown, Paris and New York the level of the competition had reached an ever high in its seventh edition.

A round stage formed the centre of the pulsating grandstand. In the last of the 15 1-on-1 battles the Brazilian Neguin faced the “The Flying Dutchman” Just Do It victorious in the Semi Finals against German Airdit, handicapped by a lost shoe. Neguin won the battle with advanced technicality and an awe-inspiring performance. The Brazilian “Ginga,” that mystical quality of movement and attitude, that made Brazilian soccer players world famous, worked its magic for him. He got four of the five judges votes.

Japan has a lively Hip Hop scene with its epicentre in the 30-million-people-capital. Between temples and gambling halls, skyscrapers and karaoke bars, geishas and sumo wrestlers this year’s Red Bull BC One ranks an event unmatched. As crew competitions have grown more popular over the last decade, this competition goes back to the roots of 1-on-1 battles.

It was a historical happening for B-Boying culture as it combined its very origin with the hottest acts of today. Charlie Ahearn who in 1983 made the movie “Wild Style” which, when brought to Japan in 1983, marked the birth of the Japanese Hip Hop scene, attended the event. Ken Swift, a teenager back then and a member of the infamous Rock Steady Crew, starred in it and returned now as a judge.

For him, this year’s winner is justified: “Neguin is an amazing entertainer and very consistent.” Neguin himself thinks that versatility and authenticity have helped him win the competition. The sources of his inspiration he claims to be endlessly: “Everything I see, I can dance. If I see a bird flying, I can dance that too.”

More than 3,000 people jumped up from their seats when New York rapper-legend Big Daddy Kane started rhyming to Japanese DJ Mar’s beats. The vibe reached its climax when all 16 competing B-Boys entered the stage to pay their respects to their audience. “The Japanese fans were inspiring,” Neguin emphasized after his victory. Holding his trophy and hugging his final opponent, Just Do It, Neguin shouted: “We are all winners. We dance for life!” Red Bull Reporter is a programme that sends aspiring writers, photographers, filmmakers and presenters to cover awesome music, culture and sports events all over the globe. Find out how you can get involved at www.redbullreporter.com