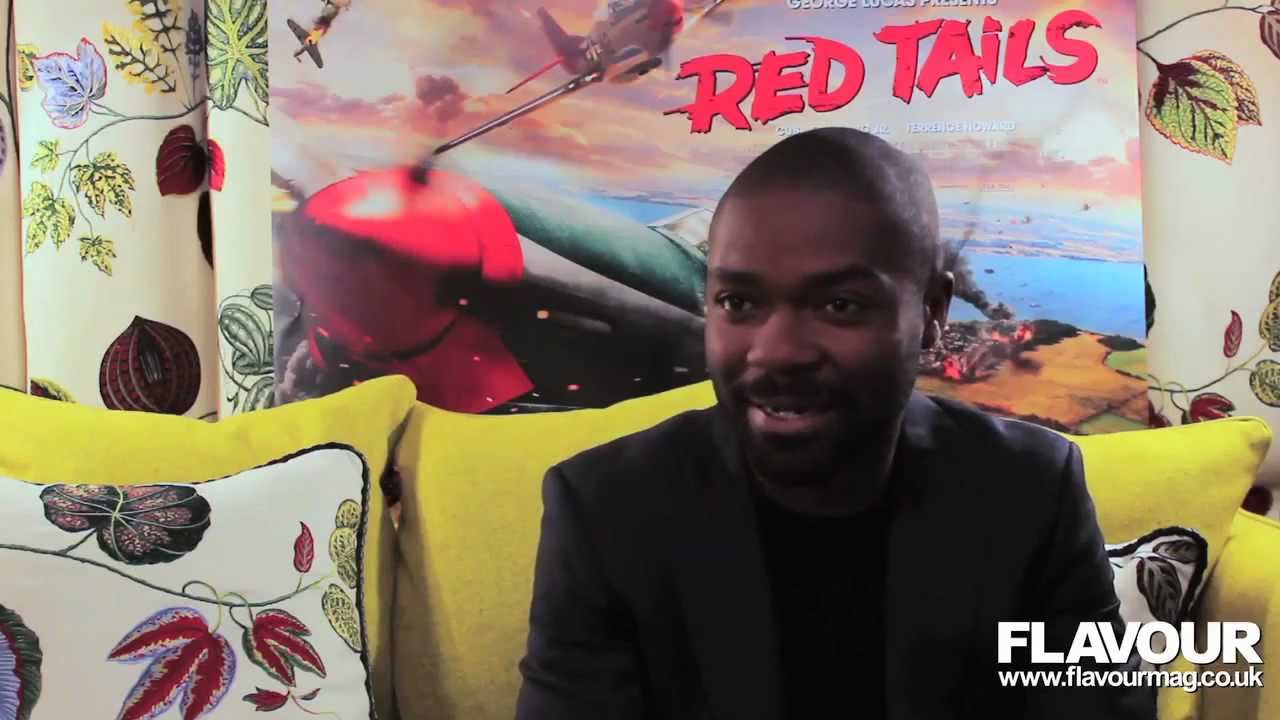 Set at the time of the Second World War, Red Tails is a fictional portrayal of the real Tuskegee airmen who were the first black men to fight for their country. The men are given second hand planes and not given the chance to fully prove themselves by fighting frontline against the enemies. Conrad played by Terrance Howard convinces the authorities to ‘believe’ in their abilities and the men are finally given brand new planes with the tails painted red as the ‘superheroes’ get ready for a ‘real war’.

After doing a Red Tails film review, it was time to meet Mr Oyelowo himself who takes on the American accent with ease. ‘Accents is something I take very seriously. The mistake you could make is to go in and do a very general accent. I worked with a dialect coach and put in the time to get it right’.

The emotional core of the story belongs to a very courageous character ‘Joe ‘lightning’ Little’ who wants to do nothing more than inspire his team played by our very own British actor David Oyelowo.‘Lightning is very much not like me.’ Says David. ‘I was never a rebellious teenager but it was good to play someone so different.’ I also caught up with Director Anthony Hemmingway and Grammy award winner Cuba Gooding Jr. Anthony made the cast take part in a strenuous boot camp. ‘I dont think any of them knew what they were getting into! There were days they would shoot me daggers!’ I ask David to recall this event, ‘Yeah the boot camp was not a popular decision! But we formed a brotherhood which was nice’.

Executive producer George Lucus has given us Star Wars and Indiana Jones and now the incredible action packed Red Tails. George was the man behind all the finance and budgets for the film and admitted he was surprised how hard it was to promote a film with an all black cast compared to a film with a ‘white superhero’ for example. ‘I hope the film gets the respect it deserves in the UK,’ says David, ‘It is a story that must be told.’ The real Tuskegee airmen were on set with the cast throughout the movie process giving advice and ideas. I ask Cuba what it was like meeting the real Tuskegee airmen and whether it added pressure to his role. ‘Meeting the Tuskegee men was intimidating but mainly inspiring. It’s no accident they achieved what they achieved. These are men of excellence who let their excellence alone do the talking.’

So what will people take away from this film? ‘I think people will learn that excellence overcomes adversity’ says David. Anybody from any walk of life will have hope that with true perseverance and determination, anything is possible.’ I must admit that I was left feeling very hopeful for ‘change’ in every sense of the word but also ‘proud’. Proud of these men who continued to prove themselves with all odds against them.

Dr Roscoe Brown, one of the surviving air pilots says ‘This film shows that we as an outstanding collective group in the highest branch of the military airforce overcome stereotypes. They said we didn’t have the intelligence or the coordination or the leadership ability to be pilots. And we proved that we did that and more!’ Although it took a long time, what these guys did led to the desegregation of the army, the civil rights movement and opened the door for many black men and women to fight for their country. The real Tuskegee airmen have gone on to do incredible things with some now as educators, CEO’s and charity event makers. As serious as the story is for people to know what these guys did and how they put their neck on the line, the film is filled with humour, the greatest dog fight action we have ever seen and a love story as ‘Lightning’ meets a local Italian woman Sophia. ‘The men were seen as heroes or Gods in those times.’ says David. ‘Everyone loved them.’

Watch the hilarious quick fire round questions, full interviews with Cuba Gooding Jr, Anthony Hemmingway, David Oyelowo and some exclusive behind the scenes footage below:

[Need to hire a photography or video studio? Look no futher than ICandy Studios]