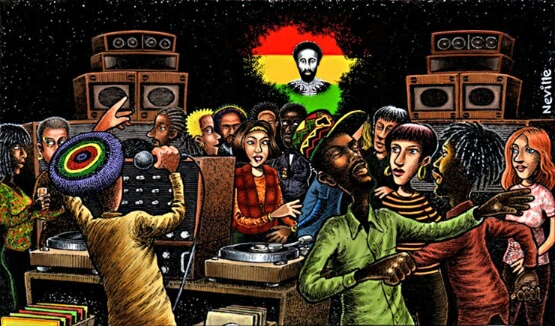 If you caught our interview at FlavourMag.co.uk with up and coming Reggae artist, Lucus Dipasquale, you know how much I value Reggae music.

And it is no secret that when most people hear the word reggae, names like Bob Marley, Peter Tosh, Sean Paul, Shaggy and others come to mind. However, the great majority of weekly or monthly events that cater to this West Indian sound will almost always default to the genre of Dancehall.

A rebellious child of Reggae, Dancehall music is most typically recognized by its fast tempo, aggressive lyrics, and overt sexual messages. And whereas, there is a time when one needs to get excited and “hype-up”, for it to be the majority of what is available at West Indian D.J. events, it is exhausting and overwhelming. It would seem that the cool sounds of Reggae’s history has been left to specialty events that MAY come around once every few months.

The Reggae sub-genres of Rocksteady, Roots, and Rub-a-Dub (i.e. Lovers Rock) were popular during a time when people were far more socially conscious, took their time enjoying life, and intended to make the most out of relationships. But now, in this society catered to by the instant-gratification culture, weekdays are a blur and weekends are a blink. Constant electronic and media distractions, faster adverts, louder noises, and less time to recharge all seem to cooperate with the “air” of Dancehall music. So you go out Friday AND Saturday to hear the same Dancehall tempo spun the whole evening, then when Monday comes round, it’s the most hated day because there wasn’t anything over the past few days to help you recalibrate your work week mentality.

Burn-out. So we go to work groggy, we are short-tempered, we are mean to people, and have the patience of a gnat. And only to look toward life again in  “Fast-Forward” come the weekend. Now I am in no way solely blaming Dancehall music for this vicious cycle, but I am saying it is one of the soundtracks to this vicious cycle. There are cities that continue to try hard at keeping the chill factor of real Reggae music alive in DJ events. London always has Revival or Rockers event at some place during any given month. In fact when I would bartend at Porkys Wine Bar in Streatham, the nights when the concentration of music was Revival and Lovers Rock, those were the nights were I noticed the patrons to be more peaceful.

The environment was one of unity, consciousness, and love. And the tunes had people rocking all night long! In stark contrast to working at the now defunct Club Illusions in Brixton. A fight broke out every weekend, people would stand on the walls “screw-facing”, and aggression was always the order of the day.

At the end of my shift on those nights, I always left mentally drained and in dire need of some “meditation”. But London will never let the good vibes completely die out. But in places like Miami, one would be hard pressed to find a weekly Rockers night somewhere outside of the days leading up to the annual 9-Mile fest (formally Bob Marley Festival).

Even at that fest, more and more Dancehall music has been featured. I remember searching high and low after I got off work on the weekends in Miami for a place I could go to to relax all night to the sounds of John Holt, Delroy Willson, Max Romeo, and the like. It was rear. It is rear. And Atlanta, for a while, has been the same way. Until, however, of late… A few young DJ’s in the Metro Atlanta area have begun to consistently (monthly) offer the healthy alternative to Dancehall. Rocksteady, Lover’s Rock, Roots Reggae and the like are all the main attraction at their monthly events. Unlike their peers, where that is only a way to “bless up” the venue for an hour or so before the hard-hitting Dancehall vibe takes over for the rest of the evening.

Kahlil of Highlanda Sound, Empress Rah, and DJ Passport have been Atlanta’s real Reggae resuscitators. Typically held in venues and lounges that tend to attract the creative crowd on a regular basis anyway, this crew of well-meaning ear wizards are on to something well needed for the right-hearted thirsting for conscious vibes. Solomon of antiquity once said, “..what has been done will be done again..”. And as was mentioned at the outset, there was a time when real Reggae music was the fancy, and that time is coming again.

In a recent conversation with  Kahlil of Highlanda Sound, we mentioned that this revival will be slow in gaining traction, because Dancehall is the only thing the masses have been fed for years in Atlanta. But then he said, “People are already starting to get tired of that.” No kidding. At their last monthly instalment, simply named “Rocksteady” they brought out guest DJ isis Swaby, daughter of famous Reggae musician Augustus Pablo, and she certainly lived up to her father’s talent! With their  monthly line up of DJ’d events, Highlanda Sound, Emress Rah, and DJ Passport are gearing to be Atlanta’s new pioneers. And speaking of line up, here is what theirs consists of:

“Rocksteady” – The only Roots Reggae session every 1st Friday in the city of Atlanta.

And few more in the works according to Kahlil which you can learn more about at www.highlanda.net. Empress Rah can be found @DJEMPRESSRAH on Instagram, and DJ Passport can be found at www.thehonorarycitizen.com.

Support good music in your city. Music that uplifts your mind and cultivates love to your community and if ever in Atlanta, Georgia, be ready to hold a vibes!