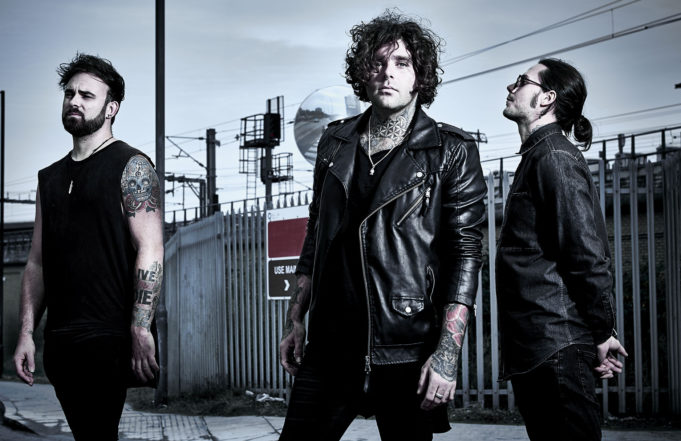 I sat down backstage at Nambucca in Islington last week with Dan and Joe from Reigning Days. With the new release of their new album ‘Eclipse’, I chatted to the guys about what it’s like not belonging to the ‘scene’ and how the new album came about.

How did you guys meet?

J- It’s actually a long story, it ended up with Dan and me in handcuffs.

D- Yeah, we knew of each other and we decided to get together over a few beers and we got a bit too smashed, the rest is history! We then started making tunes and gigging! We brought Eliot in recently.

J- We actually met Eliot in our first year, we were playing a festival in Tynemouth and he became apart of the extended family.

D- I’ve known Eliot since he was in nappies basically! Like 11/12 years old and he’s still in nappies now…

And for those who haven’t heard from you, how would you describe your sound?

D- That’s an awkward one, isn’t it? It’s basically Rock but not like screamo or death metal.

J- Since our album came out all the reviews we’ve had have been comparing us to Biffy Clyro, Royal Blood and the Foo Fighters and it’s kinda like down the middle rock but we’re not associated with the ‘scene’ and nowadays it’s so easy to be in a band and belong to a specific sub-genre and we’ve never done that, not by choice but we’ve never belonged to a ‘scene’. We’ve always been on the fringes of everything and doing our own thing so we’re just generalised rock!

Can you tell me about your album eclipse?

D- Our album ‘Eclipse’ was written over three or four years and we had a version recorded but then we decided to rerecord it at Abbey Road! It’s been a bit of a patched work of phases of our band life but it’s here now…finally!

Tell me about your songwriting process?

D- Sometimes we just get into a room and just jam it out and that’s where riff ideas will come from and sometimes I’ll just write out a melody or a vocal and then take it to rehearsals and we form it that way.

J- Soundchecks! If we have a long enough tour, you can too many soundchecks to remember and sometimes it accidentally turns into writing something new and sometimes the best part of our set is what we either make during the soundcheck or just making stuff up on the spot. Is there one place you would like to tour this album?

D- Everywhere! Germany is great! I’d love to do South America because that’s just crazy… providing I don’t have to pay for it!

Out of all the gigs, you have played which one stands out for you?

J- There has been a lot but for me, because we’ve had a bumpy old career but there’s been a few standout shows like the gig we played at The Roundhouse in Camden, My favourite was when we played The O2 Ritz in Manchester and I don’t know why! Manchester always seems to really really get it! It was just a mad show

D- Yeah I agree! Either that or Sound Zero.

What’s the best advice you have received since starting Reigning Days and what advice would you give budding musicians?

J- Don’t ever start a band.

D- I’ve learnt not to drink before going on stage now!

D- Yeah we kept doing what people said and we thought we’d be really good if we took their advice but you start to lose sight of who you are and what you’re trying to achieve.

What’s been the highlight of your career so far?

J- Making it here today in time for Soundcheck! I think my highlight is definitely getting this album out and it’s taken a lot of work to get to this album and this time around we did what we wanted and liked!

What’s next for Reigning days?

D- Domination! No… erm a bit of touring and we aren’t playing too many club shows as I think you can really upset your soul and we’re playing fewer shows but more good ones.