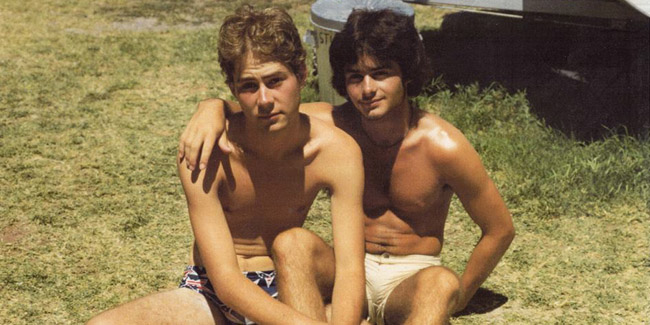 A real-life gay love story set in 80s Australia was one of the most moving cinematic experiences of last year.  But can a documentary about the same couple cause a spike in tissue sales?

Just under a year ago, cinema audiences clutched their tissues as they watched Holding The Man, the deeply moving true story of two gay Australians, Timothy Conigrave and John Caleo.  Growing up in the 80s and faced with opposition at just every turn, the two fell in love and stayed together for 15 years until John died as a result of HIV.  Both had been diagnosed with the disease and Timothy lived long enough to complete his memoir, now recognised as one of the major works on the AIDS epidemic.

Their story returns in the documentary Remembering The Man, now available online and on DVD.  Based on a long lost recorded interview with Conigrave after John had died and with that echo in the title, it would be too easy to assume the two films are interchangeable.  Certainly, they have the same central characters and much of the narrative is similar, but they’re actually companion pieces.  And it doesn’t matter overmuch which way round you watch them.  Just so long as you do.

Thanks to social media and smartphones, we seem to photograph anything and everything to do with our lives.  Looking at Remembering The Man, you’d think the craze for preserving everything photographically has been with us for years.  It’s full of photographic prints, all stored in albums provided by Tim and John’s families and friends.  And the film is punctuated by the people closest to them, along with reconstructions and face to face interviews, but only with their friends.  We never hear directly from either set of parents: they’re just talked about by the friends and they’re played by actors as well.  It’s never explained why they don’t make an appearance in the film, but there’s a definite sense that they’ve made the right decision.  Theirs is another story entirely.

The portrayal of the parents is just one of the points of difference between the documentary and last year’s drama.  In the latter, Tim’s parents are the more sympathetic and supportive, while John’s father never accepts that his son is gay and his mother is torn between father and son.  Here, we see a very different portrait of the Conigraves.  Tim’s father is noticeably less sympathetic – admittedly, not as belligerent as the portrayal of Mr Caleo, but certainly not as accepting either.

And while Holding The Man was very much a portrait of both young men, the documentary concentrates on Tim.  There’s more about what Tim did when he and John decided to take a break from each other.  And we discover how they both became HIV positive.  Anybody seeing last year’s film would have assumed it was the result of Tim’s promiscuity while they were apart, but during that time John had just one relationship.  Sadly, one was all it took.

The film is a more overt critique of social attitudes of the day, particularly in Australia, as well as media coverage of the gay community and the AIDS crisis.  It’s also uncomfortably frank about the realities of dying from the disease.  Shots of AIDS sufferers towards the end of their lives grab you by the throat, your eyes smart and you can hardly bear to look.  But look you must because it backs up the descriptions of John’s last days, when he screamed with the agony of having drains in his lungs, both of which had collapsed.  And they prepare you for the photographs of John himself, a shadow of his former self, his big expressive eyes even larger in his sunken face.  Yet he’s still resilient, still fighting on.

If you’re seen Holding The Man, you’ll have an idea of what to expect from the documentary.  If not, then hopefully you do now.  It’s a fitting and powerful companion to the dramatized version and the fact that it has plenty of points of difference as well makes it even more worth watching.  Just make sure you watch them without too long a gap – and preferably consecutively.