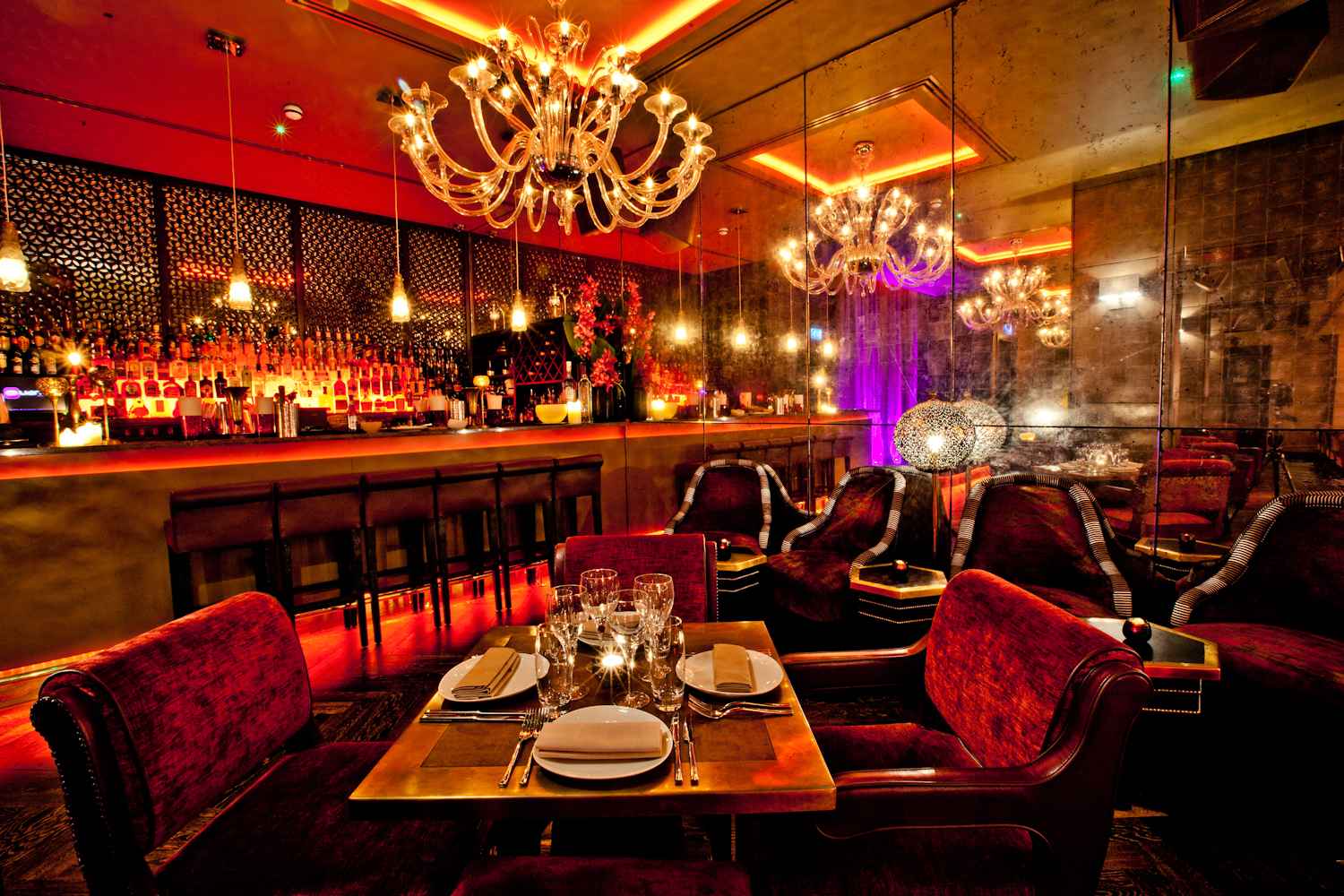 Along the affluent Curzon Street in Mayfair lies one of London’s many Middle-Eastern haunts, Mamounia Lounge. Middle-Eastern cuisine is becoming increasingly popular amongst British diners demanding deliciously seasoned delights such as Hummus, Falafel and Baklawa so on Saturday I went to see what all the fuss is about! Upon approaching Mamounia Lounge in Mayfair you are greeted by the fruitful essence of Shisha Pipes burning outside the entrance which instantly puts you in the mood for an Arabic feast!

We arrived around 7pm on a Saturday evening and was greeted by a smiling host who took our coats and led us downstairs into the main restaurant area. The décor inside Mamounia Lounge is luxurious and authentic; large golden chandeliers, candles and traditional furniture form the back-drop for the evening as we were shown to our table. We were the first to arrive but the host assured us they were expecting a busy night. Upon being seated we were greeted by our waiter Edmond who was charming and informative all evening. Throughout our stay the waiter shared with us everything we needed to know about Middle-Eastern cuisine from what sides accompany each dish to which wine best compliments each meat. I am no expert on Tabouleh and Tricolore and such dishes so to have a waiter who was more than willing to educate us on the food we was about to enjoy really enhanced the experience.

Something that I wasn’t expecting was for Mamounia Lounge to boast an incredible cocktail menu with dozens of vibrant offerings from Mojitos to the more traditional Marrakech Express. I opted for the Caribbean Breeze – a refreshing mix of fruit, rum and vanilla essence whilst my guest had a non-alcoholic fresh fruit cocktail. The cocktails are wonderfully presented and generously laden with premium alcohol. After explaining the different types of wine our waiter brought us a bottle of red wine which was constantly topped up for us throughout the evening. The menu is large and full of choice with a wide range of hot and cold Mezze, pastries, meats and vegetable dishes ensuring all tastes are catered for. To start we decided on a couple of dishes to share; Falafel and Jawaneh (marinated chicken wings.)  Upon recommendation from our waiter we also had a plate of Moutabel, a cold Mezze Aubergine purée seasoned and served with Pita Bred.  Hot and fresh, the starters were beautifully presented onto our table as we began to tuck in. The Falafel was flavoursome but not overpowering and was accompanied with a creamy Tahini sauce. The chicken wings were hot, simple and lightly seasoned whilst the Moutabels smoky flavour was delicious.

Almost forgetting we had 2 more courses to come we had to prise ourselves away from our delicious starters to save room for our main courses. My guest chose the Lamb Tagine whilst I opted for Meshoui – a traditional shoulder of lamb slowly roasted and marinated in Moroccan spices. Upon the waiters recommendation I had creamy mashed potatoes to accompany my Meshoui whilst my guest had home-made buttered couscous for the Tagine.

The Tagine arrived at the table in a traditional pot whilst the Meshoui was served on a wooden style board – presented well. The smell of Apricot from the Tagine was incredible and the lamb from both dishes was lean and amongst the best I have ever tried. The Tagine had a delightful sweet taste from the Apricots whilst the Meshouis Bouillon ensured it was not dry and the Mash Potatoes complimented it perfectly. By this point the restaurant had filled up with a mixture of couples and trendy 20 some-things enjoying a meal or cocktail before a Saturday night out. Buzzing conversation filled the room resulting in a vibrant atmosphere whilst the restaurants musician played traditional music across the floor. We were informed that later on in the evening a Belly Dancer would perform but unfortunately this was after we had left. After our meals our waiter brought us some Moroccan Tea in an authentic Aladdin style tea pot! The sweet mint taste was a perfect palette cleanser after the main course.  For dessert I had a Chocolate Fondant whilst my guest had a Pineapple Platter. Both were good and the platter was huge!

I thoroughly enjoyed my Middle-Eastern experience at Mamounia Lounge with it instantly earning a place amongst my favourite London restaurants. The food was delicious, the staff were knowledgeable and attentive whilst the luxurious fixtures and fittings allowed those inside to fall into it’s Middle Eastern Charm!