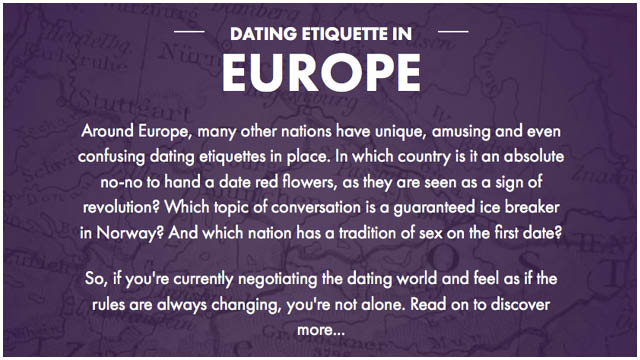 MySingleFriend unveils the ultimate guide to dating across Europe, in it’s goal to create as many happy couples across the world as possible, online dating service MySingleFriend has scoured the European dating scene and developed an interactive dating map detailing the need-to-know basics for dating across the continent.

It’s not news that more and more couples are meeting digitally, and with the introduction of dating apps that enable you to connect with new people from wherever you are in the world – location is now not a factor in finding love. Broadening your horizons has developed a whole new meaning!

Reports from the Economist show that within British marriages, 9% include a spouse born outside the UK, whilst in the Baltic States, more than 15% of married couples include a non-native partner.

With this in mind, it’s important to know some of the dos and do nots when it comes to dating abroad. For example…