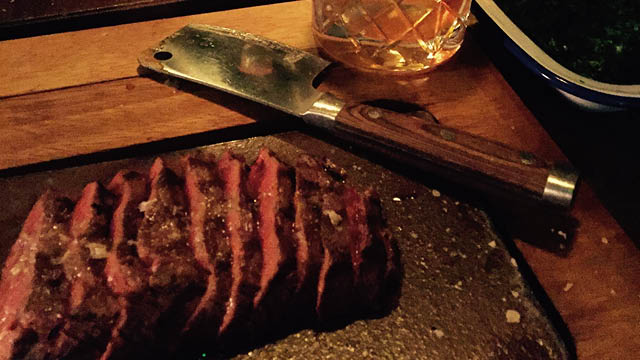 I had been told about Flat Iron several times, but as steak does not usually come cheap, especially in London, I assumed it would be out of my league for a spare of the moment, mid-week meal.

I was incorrect, and have been so many times since that I should have some kind of loyalty card.
We visited the newest Flat Iron restaurant on Curtain Road, Shoreditch, where you’re never far away from a leather backpack or pair of Stan Smiths (I must admit that I own both of these things.) The venue itself is stylised with bare timbers, industrial metal fixtures and canteen style seating – it almost feels slightly Nordic.
On arrival, we were shown to our table and given a pot of tasty, Beef Dripping Popcorn. Now this sounds weird, but it’s incredibly moorish after the first few handfuls; savoury, meaty and slightly salty.
The Flat Iron menu is incredibly simple, there is the brands signature steak, with a choice of four sauces (Bernaise, Peppercorn, Fred’s, Horseradish Cream) and a small selection of delicious sides, including Dripping Cooked Chips, Roasted Aubergine, Creamed Spinach and Sophie’s Salad. There is also the days specials, which can range from burgers to different cuts of steak.
I had my signature steak rare, it was beautifully scorched on the outside and perfectly pink, juicy and soft on the inside; I accompanied this with a thick and flavoursome peppercorn sauce, which I then slathered on every other edible item on the table. As Flat Iron’s signature steaks are quite small, we shared the days special, Bavaria, which has to be cooked medium rare. The Bavaria steak is bigger, juicier and thicker than the signature steak, topped with a sprinkling of sea salt – in some ways, I almost preferred it.
We tried the Dripping Cooked Chips, which are triple fried for extra flavour and crispness; I was expecting chunky chips, but these were fries – very good fries none the less. We also shared the Creamed Spinach which I can highly recommend, it’s a nice contrast to the meaty flavours present in the other dishes. The service at Flat Iron is swift, but friendly and relaxed, you don’t feel as though you’re being rushed and the venue is always busy enough that there is a nice, buzzing atmosphere. The no-bookings element is not an issue either, you’re given a text once your table is free, which they hold for 10 minutes – allowing you to head to the local pub for a drink whilst you wait.
Flat Iron’s signature steak is only a tenner, but you do have to pay extra for the sides. For me it’s still great value though, as to have a steak like that anywhere else in the city is likely to set you back at least £17. For two people, you’re looking at about £50 for a meal, including a few drinks each. The only thing to note is not to make the rookie mistake of prioritising your sides, as if you get too full up, you can’t take the meat home – and trust me, you’ll want to.
Visit www.flatironsteak.co.uk now