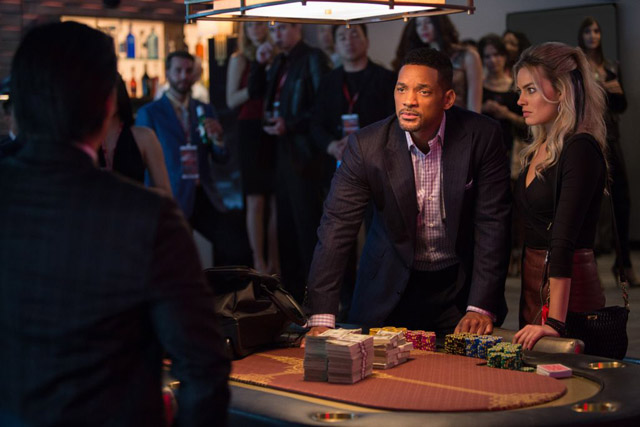 Nicky (Will Smith) has been in the con artist game for most of his life thanks to his Dad, after a meeting with Jess (Margot Robbie, against his better judgement decides to take her under his wing and teaches her the tricks of the trade.

However after the pair become romantically involved Nicky has second thoughts about how close they are becoming and realises he needs to keep his focus on his craft and ends their relationship. Fast forward three years, Nicky is in Buenos Aires working a scheme to end all schemes when Jess, now an accomplished femme fatale, unexpectedly shows up. Her appearance throws Nicky for a loop at a time when he cannot afford to be off his game putting the whole heist in danger.

Before filming, the filmmakers hired a firm of professional con artists (yes there is actually a legitimate business out there offering their services) in order to make each lift totally convincing, it certainly was money well spent as each lift during the first quarter of the film during a carnival was totally mesmerizing, it was like watching a choreographed dance scene it was that smooth.

Let’s face it, no matter how much we love Big Willie he has starred in some stinkers over the years, so please have an open mind when you treat yourself to seeing this surprising little gem. Not only is it an eye opener into the tricks of pick pocketing (you’ll certainly be a hell of a lot more vigilante to any woman’s advances men) but it’ll have you second guessing all the way through.

Most heist movies these days are pretty predictable, you’ve seen one you’ve seen them all, But this is certainly no Oceans 11 or 12 where yes it was a good fun movie unfortunately you always knew what the next step was before it unfolded onto the screen.

Focus will completely through you not once, not twice but all the way through. You may think you’ve figured out what happens next but believe me you don’t know sh**e. It’s so refreshing to get a storyline which may seem a bit old get that injection of a new life. Writers and Directors Glenn Ficarra and John Requa have added a small yet genius touch with many twists especially ones you just don’t see coming. Try not to pre-guess the next move you’ll only give yourself a headache.

In Will Smith style, we are also treated to that light hearted humour to, the best lines coming in the form of crude one liners and keeps the film from falling into a bit of a stalemate. It picks us up when we may feel just a little bit jaded.

What makes this film sexy and slick too is the chemistry between Smith and his leading lady Margot Robbie, She’s young, sexy, and beautiful and certainly seems to have Smith completely under control. Smith admitted (jovially) during filming that she should have just been the Director she was that bossy on set. Their chemistry off screen was certainly transferred well onto the big screen, it’s like they were made for each other even if there is a 20 year age gap between the two. Plus with her young hot body and Smith’s toned torso there’s enough eye candy for both the sexes to enjoy.

Focus is a slick and sophisticated heist movie, full of witty lines, tense drama psychology and intrigue. Smart and Sexy is definitely a winner every time.

Focus is released in cinemas on the 27th of February