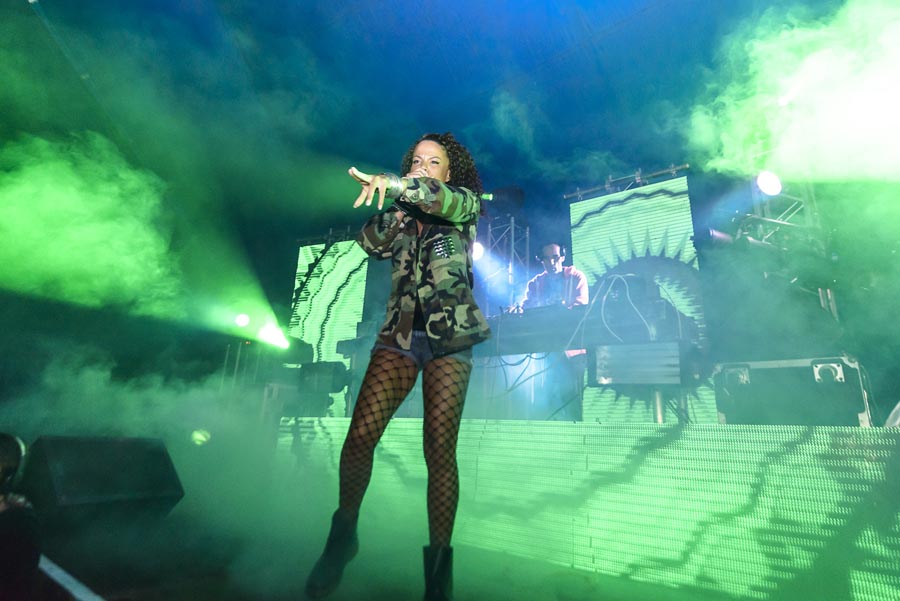 The HD Festival, now in its second year, returned with more than 60 live acts with hundreds of LED screen panels, pyrotechnics, C02 canons and multi-coloured lasers.

The atmosphere was friendly as the sun shone on thousands who looked forward to entertainment on offer in the seven different arena tents including a digital, D&B and jungle arena stage; there was something to please everyone. Acts like Ms Dynamite, Roses Gabor, Shy FX, General Levy, Chrissy Criss,  Eats Everything, and headliner Labrinth entertained a hefty crowd which was as diverse as the entertainment on offer. There were, arts and crafts, a funfair with stomach-churning rides, and everything from hot dogs to free coconut water…there was so much on offer that in ten hours you could still leave and not have seen everything! UK singer Roses Gabor kicked off proceedings in the digital arena tent with a hand-thumping performance. Rapper Dot Rotten failed to turn up for his scheduled set.

But it was no loss as the reigning queen of garage Ms. Dynamite certainly brought the noise to Forrest Farm. Full of energy she played a back-catalogue of her hits including the much loved ‘Booo!’ and ‘Dy-Na-Mi-Tee.’ Shy FX soon followed with some Ragga-Jungle anthems which got people dancing, Katy B chilled the mood with a laidback performance, whilst Labrinth brought the festival to a close with his astounding live band. Maintaining that element of suspense and anticipation, Labrinth ran through a rendition of ‘Let The Sunshine’, highlighting his matured and soulful vocal range. This made the oversized tent, with some incredible on stage lighting all the more intimate. Dressed in full black, the super producer/singer glided around, mic in hand impressing onlookers with ‘Earthquake,’ ‘Passout,’ and ‘Beneath Your Beautiful’. Attempting to stroll through the High Definition arena tent was impractical – Maya Jane Coles’ one hour and thirty minute set managed to draw in thousands. But all in all, the show was stolen effortlessly by General Levy, the reggae/jungle MC – with his 90s hit ‘Incredible’. Despite turning up two hours late, he still managed to cause a frenzy in the Epidemik arena. Every lyric, and body wave was executed with the precision and some very unruly ravers. The day was highly praised. Roses Gabor echoed the opinions of many Essex youngsters attending the festival, “I had a great time. The vibe and everything has been amazing.”