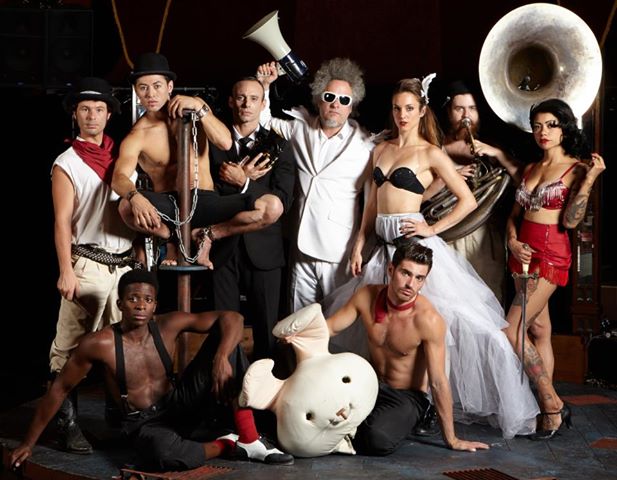 Somewhere between rapture and damnation lies the world of LIMBO. A fantastical cosmos of fire eating, gravity defying chaos which beckons you inside with a lustful grin. LIMBO is a unique blend of circus, gig and general jaw dropping antics which leave the audience riveted and slightly perturbed. Watching supposed human beings bend themselves in half, scamper up poles and backflip across the stage does leave one questioning the laws of physics. What makes Scott Maidment’s vision so remarkable is its versatility. Whilst many of the skills are circus based, they are combined with dance, music, drama and a bucket load of panache. Not a custard pie in sight. Taking place in a traditional 1920s Spiegeltent; a smoky circular arena with an elevated central stage, the setting is concurrently unfamiliar and nostalgic.

The six performers are a motley crew, hailing from all over the globe. My personal favourite was Frenchman Mikael Bres, whose particular brand of pole dancing was incredibly beautiful. Also quite alarming as his face hitting the stage seemed imminent. Fellow European Danik Abishev from Russia looks part Droog, part schoolboy in his bowler hat and short trousers. As he finds himself in a cage of light with shackled extremities the only means of freeing himself is hand balancing on a series of podiums. As he hand-hops from one podium to the next in time with a tinkling piano the effect is perilously awesome. The risky elements combined with the stage being a mere 3.6 metres in diameter (constant worry of a flaming baton entering the stalls) make LIMBO utterly compelling. The musical score has been written especially for this production and composer Sxip Shirey has created ‘JANK.’ This quirky harmonising combines elements of bluegrass, electro, jazz and a series of household items put to extraordinary use. Incredibly diverse, the sounds range from ethereal to sheer metal and perfectly narrate each on-stage event. Musicians Grant Arthur and Mick Stewart add banjos, saxophones, drums, guitars and a custom made ‘polymba’ into the mix. Australian Hilton Denis provides some seriously fancy footwork. Clip clopping onto the stage in red braces and glitter encrusted brogues he brings some rat-pack classiness to the proceedings, filling the tent with the rhythm of his feet. Like the show itself Denis’ moves are a fusion; hip-hop, breakdance, swing and tap. In a later scene Denis leads a roaring 20s dance trio, complete with hats and canes. The boom-time spirit is furthered by Coney Island original Heather Holliday whose sword swallowing antics are a sight to behold.

Another string to Limbo’s bow is the ensemble’s effusive multitasking. Contortionist Jonathan Nosan whose astounding limb manipulations and slightly sleazy persona give him an aura of a praying mantis, also takes up the French horn. After skilful renditions on the accordion, Evelyne Allard also performs an ariel-hoop act; balletically weaving herself in and out of the structure in mid-air. There is a constant sense of showmanship, with winks and nods to the audience throughout. This heightens the sense of carnival sideshow but taken to a much grander level.

Nestled on the Southbank’s Underbelly, LIMBO ticks every box for a thoroughly eclectic and unique night on the town. It has a wonderful seediness to it; an otherworldly tone of fin de siècle peepshow. Transported into an eerie world of the surreal, LIMBO is a show not to be missed.

LIMBO is showing at the Southbank’s Underbelly until the 17th of August 2014. To find out more or to book tickets please visit http://www.southbankcentre.co.uk/whatson/limbo-82055