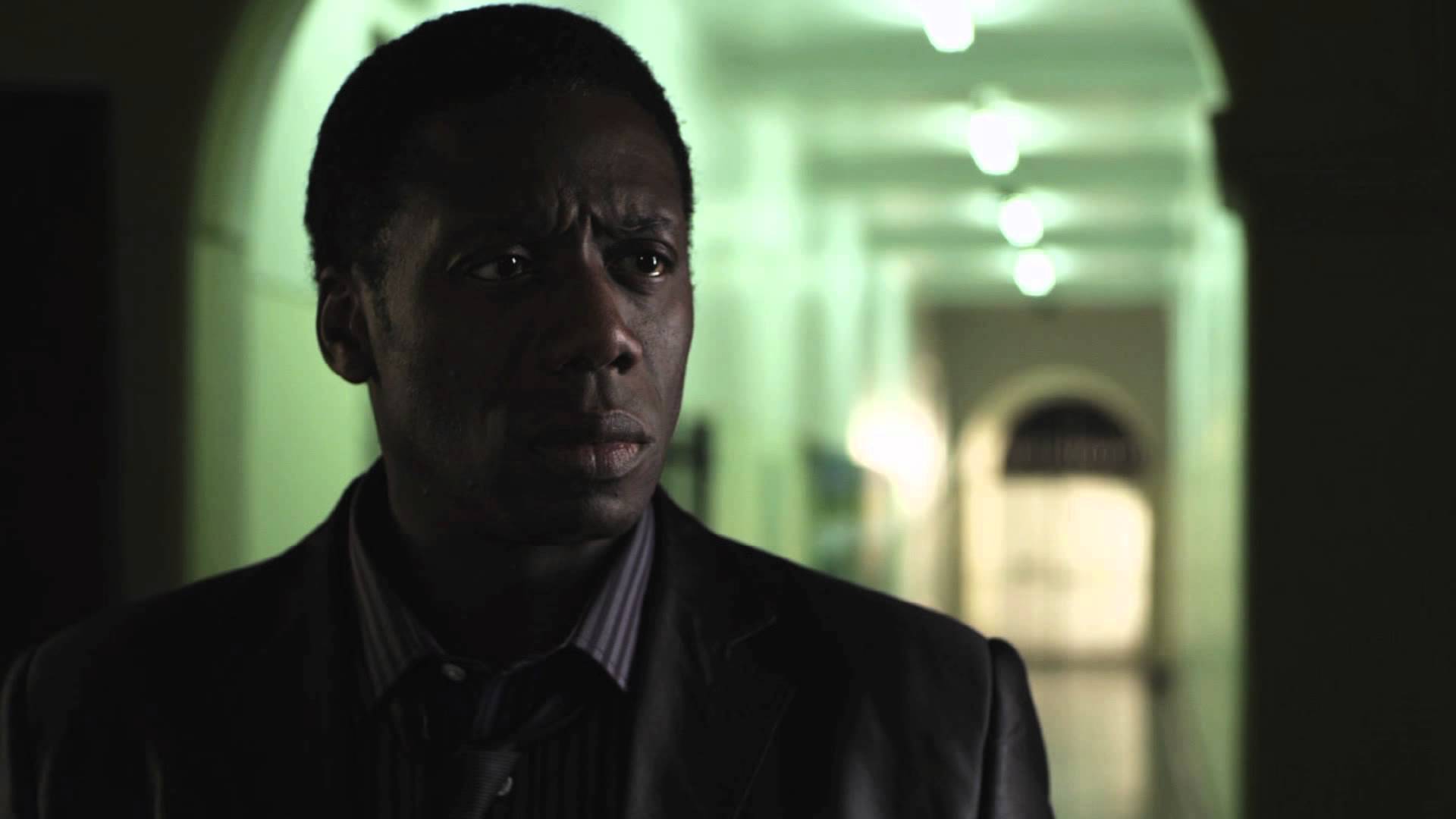 ‘Man on Ground’ is a tragic, yet poignant film, which amalgamates an explosive cast, remarkable plot and undeniable passion, to skilfully depict the horrific 2008 riots that resulted from deep-rooted hostility towards immigrants in South Africa. Produced by T.O.M pictures and directed by Akin Omotosho, this film takes the viewer on an emotive and thought-provoking rollercoaster, using dramatic methods of narration, flashbacks and slow motion action, to capture, build anticipation and mesmerise its viewers. The plot unpredictably moves away from the rising tensions and violence on the streets, to focus on the story of two expatriate brothers Ade (Hakeem Kae-Kazim), a thriving London-based banker and Femi (Fabian Adeoye Lojede), a tortured radical who escaped from his homeland. A story of contrasts; whilst hope and optimism for a better life evidently leads to prosperity for one brother, it manifests into a nightmare of deprivation and displaced hatred for the other. What initially starts as a casual visit for Ade turns into a terrifying quest, which unravels haunting memories, a Pandora Box of emotions and the startling truth behind his brother’s disappearance. Nominated for seven and winner of two African Academy Movie Awards for best film and best actress, (Thisiwe Ziqubu), Man on Ground has started its quest for global recognition. Whilst it is only Akin Omotoso’s second feature film, his passion as a filmmaker to innovatively use the screen to highlight poignant social issues, was highlighted when it featured at the Toronto International Film Festival and the Berlin Film Festival. An Avid basketball fan, he is renowned as a director of numerous short films, acting in films such as ‘Lord of War’ and more extensively for his debut feature film ‘God is Africa.’ Likening his directorial style to ‘Chilli Flavoured Dark Chocolate,’ (because of his focus on team contribution), Flavour caught up with him to talk about his vision behind the film.

Akin, can you give us a brief outline of your vision behind ‘Man on Ground?’

I wanted to make a bold yet visceral film, that wasn’t afraid to give the viewer space to meditate. Secondly, I wanted a film that would stimulate dialogue within communities affected by xenophobic violence as well as the world at large. During our research, we asked a boy what he would say to his attackers if he met them and he replied, “Tell them we are from here!” ‘Here’ being planet earth. Following that we have encouraged people to get involved in our Facebook campaign, ‘Man on Ground: Tell them we are from here.’ I hope that this film will begin to change the mindset of people who are obsessed with persecuting fellow human beings because either they don’t look like ‘us’, they don’t sound like ‘us’.

What compelled and motivated you to direct this movie?

The shocking picture of Ernesto Nhamuave being burnt alive during the xenophobic riots haunted and continues to haunt me. The research was insightful but very emotional. I was shocked at the attitudes of some people and upset at the unnecessary loss and displacement of people’s lives. It required us to focus more on general humanity and showed us that it boiled down to choice, as there were some communities that didn’t kill ‘foreigners.’ Throughout the film there is an interesting use of mediums, to implicitly assist the telling of the story. Do you think you captured your initial vision?

I wanted to produce something that made use of different mediums and wasn’t afraid to take risks with the form. The flashbacks, imagery, voiceovers and the amplified senses were all present as I imagined the film and I wanted to convey that on the screen. Considering the setbacks and how we raised the money, I was blessed with a talented cast and crew that understood and executed just that! I cherished the time I spent directing, even now there are so many scenes that bring a smile to my face!

What message do you want viewers to take away from the film?

Hopefully, the message behind one of Hakeem’s monologue when he says that despite the fact that we have constructed borders, (that mimic the narrow borders of our mind), when we look down on planet earth from space, the fact that this is our collective home is blatantly obvious. He ends it by saying, “I only hope that they realize that the labels ‘us’ and ‘them’ are one and the same”.

Flavour wanted to gain some insight of what it was like working on such an inspirational project, so we also spoke to the Hakeem Kae Kasim, who plays Ade. Whilst he may describe himself as a ‘simple man passionate about his art and family’, Hakeem has gained world recognition for his astounding performances as George Rutuguda in ‘Hotel Rwanda’ and the devilish Dubaku in ‘24 – season 7’. Never short of Awards, nominations or radiant accolades, he’s clearly an artistic chameleon, consistently transitioning from theatre to film and dexterously adapting to each and every role whether it is taking the lead as Julius Caesar supporting others in films such as ‘Wolverine’ and ‘Pirates of the Caribbean, or voicing characters for the game ‘Halo’.

Flavour talked to Hakeem about selecting roles ‘with depth and truth to them’ and his decision to act and produce in this ‘Hard Hitting Emotional Thoughtful Thriller.’ You can play the saxophone and revealed the dare devil in you when you bungee jumped, but tell us something that we don’t know?
I delivered my second child at home on the couch just me and the wife and my next stop on my artistic journey is to win an Oscar!!

Hakeem, can you tell us a little about the character and what drew you to this role?

Ade is a successful man. He left his own country, moved to the UK and has done well, however, he is haunted by demons, one of which is his estranged half brother and the other is a deep rooted resentment that despite his success, he will never get the love from his mother that his half-brother enjoys. After the riots and the terrible image of Ernesto Nhamuave being burnt alive, we decided to do something in honour of the people and country that we love so deeply, what better way than to tell the story through film.

As a Nigerian national who moved to London and South Africa, you are aware of the devastating effects of xenophobia. How much research was required?
A lot! We wanted to really understand the reason behind this displaced hatred and the effects on those that are forced to live in communities that perpetrated this on a daily basis. We wanted to get a universal feel, so we studied the gypsies in Romania and the Mexicans in the US etc

What was your greatest challenge whilst filming?

I worked closely with Akin as one of the producers, but without a doubt, the greatest challenge was making sure we had enough money to come back and carry on filming the next day.

‘Man on Ground’ undoubtedly highlights a plethora of different themes, tainting moments of love with horrific flashbacks, mirroring sibling rivalry with broken communities and contrasting camaraderie with brutality. A story of extremities, displaced hatred, heartbreak and ignorance, but one thing Flavour can guarantee is that you will never look at a burning flame in the same way!

For more information on this film, check out www.londonflairpr.com/manonground