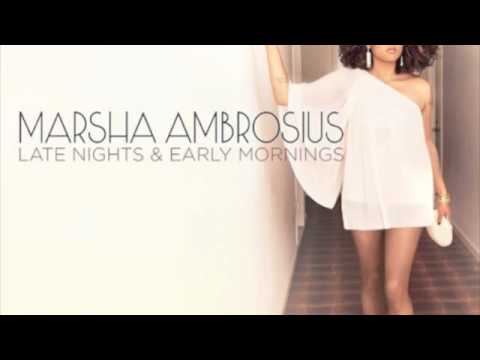 It would appear that music is now a disposable “art”. I don’t feel that “artists” create their music with the intention of it standing the tests of time. So many artists now follow trends and switch styles more times than a Casio keyboard demo. So finding that good music, that is just good because it’s good and not because it fits the times is an arduous quest. Well it looks like we’ve found that musical gem – that you would normally only find out about through word of mouth – in the composition of the debut solo album by Marsha Ambrosius’ Late Night & Early Mornings.

From the sensual and sultry vocals, to the well written (and honest) lyrics and the beautiful backdrops. When I finished listening to this album my first thought was I want to hear that again live!

Not many singers nowadays actually sing, by that I mean you very rarely hear an artist using their full vocal range. Throughout this album Marsha goes through the keys with her voice like the foreground instrument that she really is. On her reworking of Butterflies she does what I wish had been done with the Floetry original and gets really emotional and experimental throughout the vocal arrangement of the track. I can honestly say she topped Michael Jackson’s version (for those of you that didn’t know Butterflies was actually written by Marsha).

The writing of this album is near perfect. Music should touch some part of you, it should move either your body, soul or mind. The writing on this album forces you to listen and connect with the music. The use of adlibs as not just air filler but side thoughts and subconscious of the actual subject of the song is something you’d usually expect of hip hop.

Stand out tracks on the album are hard to find as they are all outstanding, but the title track Late nights & Early Mornings stands out as a the kind of slow jam that slow jam connoisseurs pray for. This is this year’s slow jam, mark my words. Your Hands which showcases Marsha’s vocal ability with a minimalist backdrop is just that ‘turn me up to ten’ type of song. Sour Times sounds like it should be the theme to a Bond movie, so if anyone knows the musical director for the next movie tip them off on this one.

If this album doesn’t receive numerous awards this year then we have a problem. The lead single Far Away which is an amazing song by itself is accompanied by a ground breaking video which in the opinion of common sense deserves to take home all of the silverware.