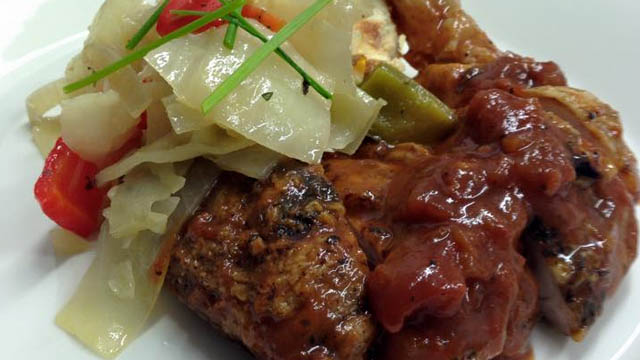 I love Caribbean food but strictly home cooked food-in other words I am damn picky a chef’s nightmare I assume. I have been to a few Caribbean restaurants and the last one left me scarred, battered and damn high because there was way too much sugar in every dish. The starter was sweet (it was meant to be savoury), the main was sweet and the sweet-well you get the picture. Ok so going to Pot and Grill I was moderately apprehensive but you know what from a food perspective my trust in Caribbean food from a restaurant was in the main restored?

The newly opened restaurant (based a stone’s throw away from Westfield Shopping centre on the Broadway) is the baby of one Maurice Charles an acclaimed chef with over twenty years of cooking experience behind him. Warm and engaging, he greets all of his guests into the minimal surroundings bordering in truth on nondescript. That aside however it’s the food that is the highlight (thankfully) and for Maurice it’s all about bringing Caribbean dishes with flourishes of European cooking, great presentation and spice without it being volcanic during eating or indeed after eating! For my guest and I we went with a starter of pulled pork and potato croquettes fried in a batter accompanied by a nice barbecue sauce and a fresh salad with baby tomatoes and green leaves-nice but simple. Main we went in for some beautiful and meaty Red Icelandic Fish served with occra, coriander and coconut on a bed of greens. The light sauce was brilliant and portion size was very generous. We could have opted for an array of simple desserts but truth be told the Caribbean size portions more than filled us.

Other meals (all reasonably priced) that we could have sampled were the more traditional Caribbean dishes but as is the case with all of Maurice’s creations he generally brings an element of European influences-salt fish fritters becomes cod fish and scallion in a tempura batter-it was wonderfully moreish.