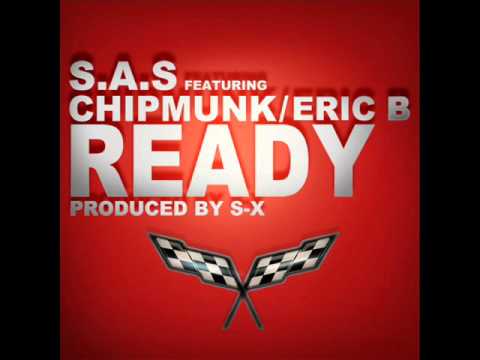 The lads, who are part of a larger group called Eurogang, are well travelled and have been putting in work for over a decade in countries such as France, Germany and Italy, to Canada and throughout the US but more specifically it was New York in which they made their mark. They regularly participated in rap battles around the city which subsequently made their names ring off like police sirens in the distance.

Many people don’t understand both Mega and Mayhem, known for their sauve-ish nature have helped to lay the foundations for which the music scene is currently witnessing in the UK today, despite the politics they have been going harder than most since the late 90’s.

When Simon Cowell masterminded the World Cup Anthem in 2010, which featured Dizzee Rascal and James Cordon he sampled the famous ‘Shout’ by British band Tears For Fears and everybody thought it was the best thing ever, but it was S.A.S who first put that very same sample to good use as they independently released their first single ‘Shout’ months before the World Cup Anthem was even getting plays on the radio, proving they have the same ability to spot the same potential as someone so iconic. The first UK act to record a track with Nicki Minaj way before she became a global icon and also the first to be co-signed by Jay Zs Rocafella Records, they became a part of The Diplomats in 02-03′ but have infamously parted ways since and now, on their own merit are demonstrating exactly why they are the UKs favourite rap duo.

After recent success with their latest release Galaxy Fly, the boys, alongside fellow North Londoner Chipmunk and Eric Bellingher have been beating up the streets with their new song ‘Ready’ which is as catchy as they come.

On this record the boys are making a statement, their ‘Ready’, and with a big production from S-X, the man behind last years biggest grime instrumental ‘Woo Riddim’ and an even bigger chorus the lads should consider it well and truly felt. Maybe not as strong as some of their previous material but there is definitely a feeling of international appeal with this one.

It’s very organic in its sound and fits perfectly with the lads demeanors, their hard, yet witty lyrics and individual characters shine through on the song with Mega kicking it off on the first verse with punchline after punchline and a wicked intro to boot. He explains we are about to listen to something of epic proportions and after a couple of listens, is not too far off the mark.

Finally, Mayhem (the older of the two brothers) cleverly sums it up in one line with the killer ‘this is bigger than the country that we living in’ and is probably the biggest statement on the record itself.

What I like about S.A.S is their delivery, they have perfected the craft of execution and spit with confidence and committment. So many people rap just for the sake of it nowadays but these two have put alot of work in over the years and represented London in corners of the world I didn’t even know existed.

Overall, ‘Ready’ is another banger the boys can be proud to add to their already impressive collection and one you definitely should support if you like good music.

Haven’t heard the track? Listen to it on YouTube  here: