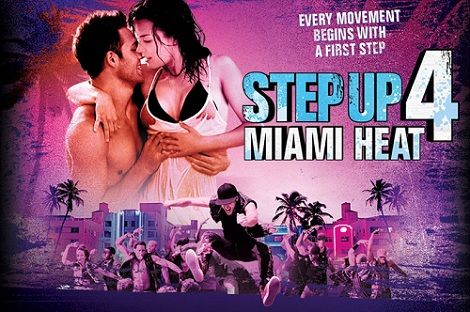 We are first introduced to the buzzing streets of south beach, Miami and tension is in the air. You get the impression either a fight is going to break out, or a drive by is about to take place. But it comes as a relief when it is revealed that all that’s about to happen is a very public display of Miami’s artistic talent, the Mob, who sound pretty sinister but are actually pretty good kids and disturb the peace by putting on a thrilling, entertaining and perfectly choreographed dance routines, along with their talented street artists who know how to leave their mark.

The first scene, they stop traffic, bouncing off cars, and bouncing them too in a way, Snoop Dogg or now (Lion) would have been proud of back in the day. The idea behind their series of publicity stunts is to reach a million hits on youtube to win a big cash prize.

Childhood friends Sean (Ryan Guzman) and Eddy ( Misha Gabriel) work at a luxury hotel during the day as waiters, breaking the rules again of hanging out in the beach club, Sean meets barmaid Emily, who dares him to dance with her, and manages to impress Sean with her sultry moves.

Sean later discovers she isn’t just a barmaid, but is the daughter of the hotels owner, and is set up to take ownership of his empire. However Emily’s less ambitious dream of being a dancer in her father’s eyes is frowned upon, and his inability to support her dream is much to her frustration, although she continues to pursue her dream and prepares for her audition to gain a place in the prestigious Wnywood dance company, although her moves impress the owner, she is told to find some more originality in her routine, once Emily discovers the hype surrounding The Mobs unique flash mob stints, and recognizes Sean as being involved, she wants in. The crew agrees to give her a shot, but first she’ll have to make her debut with a leading part in their next sequence.

She proves she’s got what it takes and soon she’s accepted as a fully fledged member of the crew.

Sean helps her prepare for her next audition with the academy, and a romance soon develops between them, scenes of them practicing their moves while descending out of the water on the beach, will bring back fond memories for Dirty dancing fans. But their romance is kept under wraps, and so is the fact that Emily is the boss’s daughter.

When it’s announced the area in which Sean and his crew live is to be destroyed and rebuilt due to Emily’s Dads commercial development plans, The Mob plan their most daring flash mob yet to try and save the waterfront. Forcing Emily to stand up to her father and up for what she believes in.

The 4th in the Step Up sequence brings back familiar faces from the previous films, and doesn’t disappoint visually with a series of energetic exhilarating performances from the talented cast.