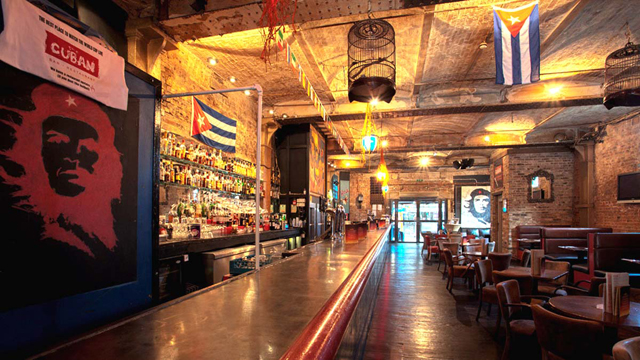 Situated in the stables market, the Cuban brings a refreshing taste of South America to the bustling heart of Camden town.

The décor comprises of exposed brickwork, wooden accents, exotic artwork and is awash with bright colours, whilst the pretty outside seating area overlooks the market, making it the perfect location for a spot of people watching. We were greeted by a friendly waitress who showed us to a booth and recommended a selection of cocktails. We went for a Dragons Den first, which is a mixture of dragon fruit, gin, lavender syrup, fresh lime and lychee; I immediately decided this was favourite and would definitely recommend it.
Between £8 and £10 a pop, the cocktails aren’t cheap, but with fresh ingredients and innovative flavour combinations, I would say they are amongst the best in Camden.

The food menu boasts an interesting fusion of Native American, African, Spanish and Caribbean cuisines. With speciality mains including Mojo Kebabs, Chorizo Chilli Beef and Deep Friend Plantain, a seafood menu including Garlic King Prawns and Spicy Cuban Muscles, a grill menu including a selection of steaks and burgers, and 15 different tapas options, there is something to whet every appetite.

We originally thought the price points for each dish were quite high and picked a selection of dishes thinking they would be relatively small portions; on arrival of the food, we immediately understood the pricing, as the portion sizes were huge.

The Patatas Bravas were perfectly crispy on the outside and were paired with a beautiful ‘homemade’ salsa, the Calamari were cooked to perfection and were complimented by a tangy garlic mayo, whilst the chicken quesadilla’s were full of flavour and suitably gooey with a crunchy exterior.

The Nacho’s Rancheros were a little too plain for my tastes, and could have done with a more generous helping of chilli beef and accompaniments as the plate was inundated with chips; the Sautéed Garlic Spinach was bursting with flavour, but sadly, far too oily.

The standout dish for us was the pan-fried chorizo; the wholesome tomato and red wine sauce complimented the spicy meat perfectly. In fact, it was so good (and we were so stuffed) that we took the remainder home!

The Cuban and Camden Market

Team Up To Host

The Cuban restaurant and Camden Market in association with Backyard Cinema will host a new six week film festival in the heart of Camden Town from Wednesday 29th July to Friday 4th September.

Showing a line-up of exclusive movies, documentaries, Indie short flicks, comedic dramas to foreign language films; movie goers can enjoy their favourite classics in an outdoor experience coupled with the finest in Cuban foods and BBQ.

Get on Up (The James Brown Biopic)

Thirsty Ticket including a cocktail, glass of wine or a bottle beer – £18