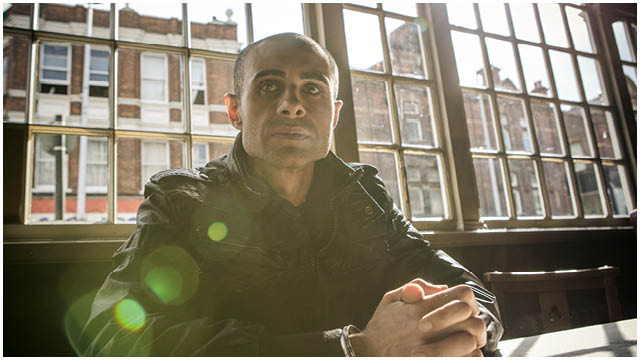 Our final interview with the cast of new film Amar Akbar and Tony comes from the guy who plays the lead role, Amar. Rez Kempton kindly sat down to answer a few questions on his career to date including working in Bollywood, his new film and dating.

You play the lead character in up-coming British comedy Amar Akbar and Tony; tell us about your character.
Amar is one third of a trio of friends who have grown up together. They are from different backgrounds & religions but have spent most of their lives living in each other’s pockets. Amar is the “sensible” one of the three. He’s loyal & ambitious. He wants to make his family proud by doing well and pursuing a career as a lawyer and make a break away from the family restaurant business. Events turn for him and de-rail his future plans and it’s about how the decisions we make today can shape the person we become for the rest of our lives.

Why did you take this role?
Atul Malhotra (Writer/Director) had written a great script with a fantastic storyline. I felt it was an honest, realistic and positive depiction of modern living in Britain. It certainly resonated with me and my experience of growing up in London and having friends from all walks of life. I realised at a young age that my strongest friendships transcended barriers of culture, class, religion etc. The fact that Amar is a leading character who is a turban wearing Sikh was original. Atul and I, discussed how important this was as we couldn’t think of a single film made recently in the West that featured a leading character that was a practising Sikh. We felt this was fresh and something audiences would have not seen before. Also, we mustn’t forget that Atul’s script was actually really, really funny.

The British film industry needs to show a bit more diversity in its films, why do you think the industry seems to be scared to cover what Britain has become and show it’s now a multicultural country?
It’s certainly a hot topic at the moment. Many of our leading British actors such as Lenny Henry, David Harewood, Lenny James and even Benedict Cumberbatch have spoken about the importance of the industry reflecting a true picture of British society. What I love about Atul’s film is that it does depict a realistic and accurate snapshot of multi-cultural Britain today. It mirrors the trials and tribulations that could face any one living in Britain regardless of their cultural or religious heritage. And that’s why it is my hope that Amar Akbar and Tony will resonate with our audiences whatever their demographic because it really does reflect a true picture of British life in 2015.

Do you think Amar, Akbar and Tony may start to change people’s perceptions of the British Asian Community?
Yes, I do believe Amar Akbar and Tony will whole heartedly change people perceptions within the British community. Until now, I do feel there has been a certain perception of British Asian life with the stories that are told which tend to be based around the same old themes. However, Atul is a director with a vision I believe in; and what he does so well in Amar Akbar and Tony is that the movie celebrates what’s great about Britain – in that we are on the whole really lucky to live in a tolerant country that embraces cultural differences which are shared and enjoyed by all. The movie is the best of both Bollywood and traditional British filmmaking.

You’ve worked in Bollywood, how does that differ to the British Film Industry?
Bollywood cinema is very much on par with its counterpart, Hollywood in that they have a proper industry and the budgets are huge. British film – even the supported films are essentially “a cottage industry” I often hear British filmmakers say “we don’t have an industry here in the UK”. We have a fantastic tradition of filmmaking but as a “well oiled financed machine” we don’t exist. We don’t have the resources of big budgets and amazing special effects that Bollywood & Hollywood have. What Bollywood and Hollywood do amazingly well is that they both know how to tap into escapism and transport audiences to another world – be it romance on a huge dramatic scale with singing and dancing or superheroes & Sci-Fi on a grand scale. We however, in Britain tend to lean more toward the earthy & grittier storytelling. Both industries are very different but actually serve their audiences well. Bollywood seems like it’s quite a lavish industry, where ours seems a bit more sedate. Which do you prefer and why?
Bollywood is a visual feast to our ears and eyes. As I said they certainly have the budgets and I do enjoy the escapism they provide. They are grand in every sense. Also I think the speed in which Bollywood turn out films (that are sometimes double the length of UK/US movies) has always been impressive. I hear figures of at least 900 plus movies a year! Wow!! However, having grown up in the UK, I feel more at home in the British film industry in terms of acting style and what I connect with on a personal level. What I love about British cinema is that it has an world popular tradition of movies that deal with social themes but have a great sense of humour – I’m thinking Full Monty, East Is East, Trainspotting & Bend It Like Beckham. I really connect with those movies.

You’ve not only appeared in Film but TV as well in programmes such as Spooks and Lee Evan’s So What Now? And also stage which do you enjoy most and which is the most challenging?
I feel really lucky to have worked in the different mediums. I’m lucky to have a job I really love and be part of a tradition that’s given me so much. They all have their different challenges but ultimately we as actors are sharing a story with an audience. The drama training in the UK tends to lean towards stage and for me, when I was training, that was quite a new experience. I was brought up on film and television but very quickly I learnt a huge respect for the theatre and the discipline that requires. Television tends to be really fast paced and that provides its own separate buzz. Film on the other hand has people with a real passion for the story/script they want to share and usually have spent years trying to raise the money for them. It’s very collaborative and it’s the medium I have a special place for in my heart.

What’s been your favourite role to date to play?
I feel part of our job – as an actor is not to judge our character and to represent them all truthfully with equal commitment. However I am really proud of Amar Akbar and Tony and I really loved playing Amar for many reasons, but mostly because I felt I could really identify with him – I like him and would definitely have him as a friend in real life! He’s solid dependable and loyal. I resonated strongly with Amar’s values and feel that I was given autonomy from Atul to really play the character based on how I would approach those situations in real life. It was a real compliment from Atul for him to trust me enough to really put my own stamp on Amar’s character. I also loved the real life friendships that developed with my fellow cast in synergy with the film’s storylines so that in itself was an added bonus.

You’re not only an actor but producer as well; what/where can we expect to see you next?
I’ve been very lucky to wear different hats. I feel as an actor it is really important to understand the industry we are in and that it is a business. Many of the actors I admire have made these different transitions to direct and produce and I’ve learnt a lot about our business by it. As for where you can see me next – I’ve another movie due to come out later in the year called Monsoon Tide. Set in beautiful Kerala, India in 2004 just after the Tsunami that hit South Asia. I’m also working on a couple of other projects and I’ll tell you more when you next have me on 😉

We like to add a bit of fun to our interviews so have added a few dating questions for you.

Are you single (don’t get it twisted I’m not asking for myself haha)?
Ha ha, well with the nature of what I do, it is always going to be tricky to get the balance right for a personal life and I’m very lucky to so I’m not actively looking for anyone at the moment because I don’t even know where life will take me next week, next month or next year. I have learned not to try and plan my life too much.

Who would be your ideal woman and why?
I guess it would be about the overall connection and compatibility. She is smart, sensitive and sexy and knows her value. She would be someone who is not afraid to be a lady but has confidence combined with a passion for life generally. Given what I do for a living, it is important that someone understands what comes with that because it’s a stressful life and when it comes to relationships, I would want to retreat to a sanctuary where I can recharge and just be living life’s simple pleasures together.

Would you class yourself a romantic man or are you one of these 21st century men that have absolutely no idea how to treat a woman?
I think I know how to treat a woman because I’m a romantic at heart. When in love I love treating my lady and not just on Valentine’s day or birthdays etc. If she’s the one I want them to know that they are loved every day of the year. Being in tune and knowing what the other person needs as and when they need it is priceless. Everyone has their love language and so it’s about working out what works for your lady.

If you really wanted to impress a woman, what would you do to make it a perfect date?
I would love to whisk someone away to Rome and have a romantic dinner in the “eternal city” I love Italy and the amazing food they have. It’s a beautiful city and very romantic. I was shooting a Merchant Ivory film in Trinidad once and Jimi Mistry and I ended up visiting this amazing place in Tobago. We found this amazing restaurant which had to be reached by climbing up these rickety ladders into the palm tree line which overlooked the ocean and had the most amazing sunset glistening on the water view. I remember us both saying to each other at the time that this was the most romantic place we’d ever been to and that we’d both have rather been there with a beautiful woman rather then a bloke! Maybe that’s where I’ll have to return to one day with my date.

Give us 3 things that are a turn on and 3 that are a turn off (keep it clean please ha).
Um okay…lets see!
Turn on: a) Passion b) Intelligence c) Laughter
Turn off: a) Arrogance b) Self-Importance c) Jealousy