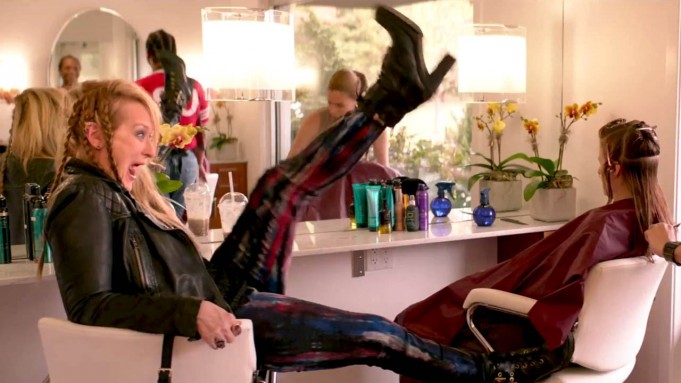 Ever since we saw one of our greatest living actresses of our time, Meryl Streep, in Mamma Mia everyone knows she isn’t too bad behind a mic and with Ricki and the Flash we get a chance to witness her as an aging Mum who just can’t give up her love for music.

In Ricki and the Flash Streep plays Ricki Rendazzo, a guitar heroine who made a world of mistakes as she followed her dreams of rock-and-roll stardom. Returning home, Ricki gets a shot at redemption and a chance to make things right as she faces the music with her family.

Whilst the title lures you into a false sense of thinking the film will be a little more music based that couldn’t be further from the truth. Yes the film opens with Ricki performing on stage with the Flash and it is kind of important to the storyline of how she abandoned her children for chase her dream of becoming a rock and roll star, the few scenes we she her and her band seem misplaced and just thrown in for good measure.

Scattered with some humour, the rest of the storyline is just yawn inducing, dull as dishwater. Seeing Ricki trying to rebuild a bond with her daughter who is in the depths of depression after she splits from her husband and the lack of love shown from her son’s has been seen before. At every turn, you’re willing for something exciting to happen but it just never materialises, making you feel extremely flat and oh so robbed.

On first seeing Ricki’s daughter, you can’t help but notice the similarity to Streep; this would be because Streep stars opposite her real-life daughter Mamie Gummer and you can tell that the love she shows for her on and off screen daughter is real, there is simply that mother and daughter connection oozing out which you just can’t fake. Whilst this is a positive the rest of the performance from the likes of Kline and the rest of the cast is just a tad lacklustre and it comes across like they just wanted to get this over with to collect their paycheck at the end of filming. There is no connection between the audience and characters in the film. You really couldn’t care less about any of them.

Whilst there were a few moments scattered throughout the film which will make you laugh and the performances were kind of believable Ricki & the flash was dull and the storyline weak. It felt like a complete anti-climax, waiting for something to happen and nothing quite materialising will leave you feeling a little disappointed.

Ricki and the Flash is out in UK Cinema’s 4th September.